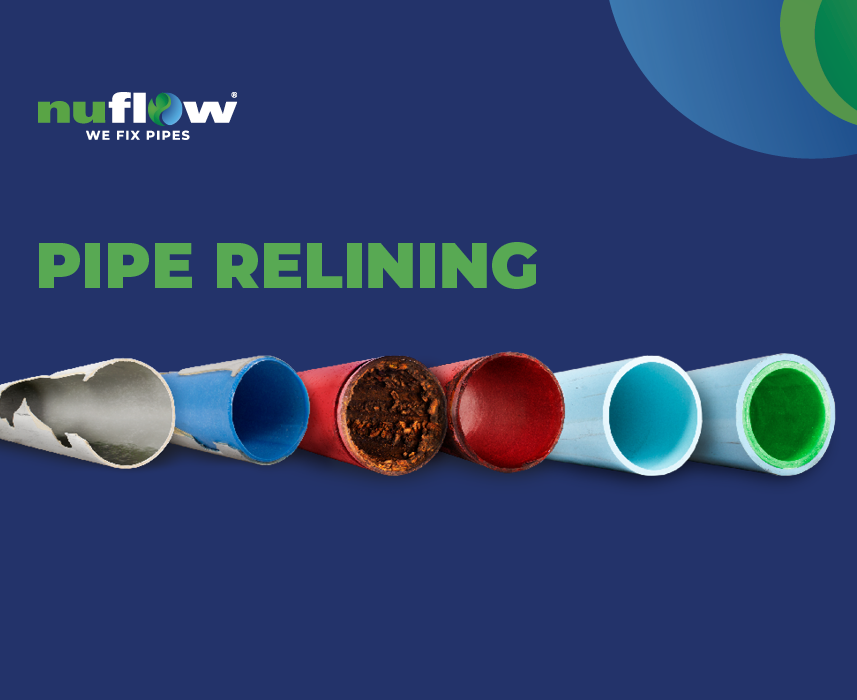 We’re often asked how it’s possible to repair broken pipes without digging them up to patch them or replace them. Pipe relining is a no dig pipe repair method that was created to solve exactly this problem! This has made pipe relining more and more popular with home owners who aren’t keen on destroying their yard or knocking down any walls.

So, what is pipe relining?

Pipe relining is a way of repairing cracked or broken pipes from the inside, without digging. Essentially, it means creating a new, tough pipe inside the existing damaged one, promoting a better flow and sealing off cracks. The section that is relined seals perfectly against the rest of your pipe system, stopping leaks and preventing further breaks.

At Nuflow, our relined pipes are even stronger than brand new pipes, and because there’s no excavation required, you won’t need to mess up your garden like you would if you were replacing your pipes entirely.

How does it work?

From one pipe relining supplier to the next, there are some different methods and approaches to relining pipes. At Nuflow, we use a cured in place pipe relining method to reline and repair broken pipes and blocked sewers.

With our custom-made composite resin solution, we create a new pipe inside your existing broken pipe. Our patented methodology has been honed over the last few decades by our in-house polymer engineers, industrial chemists, and research and development team.

Check out our process for relining pipes.

1. We inspect and measure the pipes

First, we send the drain camera down to assess the plumbing system to find any breaks and pipe blockages, and measure up. This helps us work out exactly what the problem is and where it’s situated.

2. Our certified technicians create a custom pipe lining and bladder

Once we have the measurements, we create a custom felt liner, and an inflatable bladder to match the exact specifications of the pipe, including any bends or junctions.

3. We install the pipe relining solution

When we’re ready to install the relined section of pipe, we soak the felt liner in an epoxy resin, and insert the uninflated bladder into the pipe liner. A rope is attached to each end of the liner, which we use to pull the pipe liner into place by using the existing access points to your pipes.

By using the attached ropes and the existing access points to your pipes, we pull the felt liner and uninflated bladder into place inside the pipe, without any digging. We line it up by using a specialist drain camera to make sure it’s in exactly the right spot. Then, we inflate the bladder with air, which blows out the felt liner to seal against the existing pipes, creating a new pipe that holes up any breaks or cracks. The bladder remains inflated until the resin has cured to create a hard, tough pipe.

Then we deflate the bladder and pull it back out of the pipe, leaving you with a brand new, tough and watertight pipe.

4. The relined section is checked and tested

Once your pipe has been relined, we use our CCTV drain inspection camera to check that everything has been installed and sealed correctly.

What are Nuflow’s pipe relining solutions, and what are they used for?

Different types of pipes need a different type of epoxy resin solution. For example, potable water products need to be certified as safe and chemical-free, while pipes running under roads or railways need to be completely structurally sound.

Blueline is our most commonly used pipe relining product, which can be used to reline pipes even when they have bends and junctions. We use Blueline for residential and commercial projects to repair sewer pipes, stormwater systems, vertical drain stacks and trade waste pipes – whether they’re made from clay, concrete, metal, iron, steel, PVC or fibreglass.

Redline is used for pressured pipe systems, and prevents pipes from corroding and leaching contaminants into your water. Metal pipes deteriorate over time, and our Redline solution lasts much longer to maintain pressured pipes like sprinkler systems, cooling and heating lines.

When your pipes are used for potable water, we use our Greenline pipe relining product, which is AS/NZ 4020: 2005 approved and safe for drinking water.

We use Sumoline for repairing load bearing pipes that need to be completely structurally sound – for example, when your pipes run under roads or railway lines.

If you have more questions about pipe relining, and if it’s right for your plumbing repairs, your local Nuflow team can help. Chat with us today to find out more.

Have you ever walked into your bathroom or laundry, only...
Read more
So you’re on the hunt to buy a property, and...
Read more
If your yard features sprawling trees, it’s likely you keep...
Read more