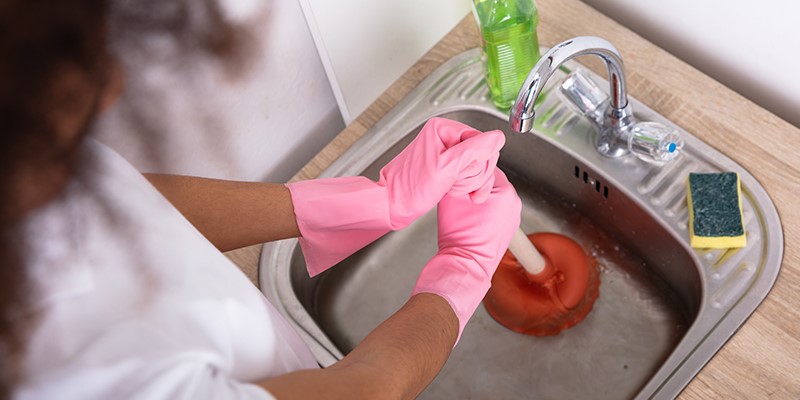 Blocked drain repairs are probably the most common service required of plumbers. But just because there’s a drain blocked, don’t automatically reach for the phone.

In this quick article, we’ll give you some of the most common blocked drain solutions used by householders to clear relatively simple blockages.

Not all will work in every situation, but they’re inexpensive and if successful, will save you a plumbing bill.

There are few ways of approaching a blocked drain.

Hot water: The quickest, easiest and cheapest way to clear minor blockages is also one of the most effective; boiling water. If there is pooled water sitting in your sink that won’t drain away, you should get this out first. Use a cup to scoop the water into a bucket so that once the boiled water is poured in it can go at a higher speed through the drain to clear the blockage. Taking care not to burn yourself, simply pour a good amount (large saucepan) of boiling water down the sink and wait to see if things clear.

Soap and hot water: If you have a drain blocked in the kitchen it is most likely the result of fats, oils or grease (FOG) going down the drain, solidifying and then acting as a dam wall to catch other matter (food scraps) that are later washed down the drain. Obviously preventing these things from entering drains is the best way to ensure you won’t need a blocked drain repair but if it’s too late and the drain is already blocked, then warm water and dishwashing liquid might be your best friends.

The first thing you will have to do is to scoop out any water from the sink and if necessary wait while excess water slowly drains from the pipe. If it does not drain, you may have to use a plunger to help it. Once the water is mainly removed, simply pour half a cup of cheap dishwashing liquid down the sink. Wait about half an hour for it to slide its way down to the blockage. After this, fill the sink with very hot (almost boiling) water (if your sink plug has no chain tie something to it so you can remove it without burning your hands). Add a bit more dishwashing liquid and mix then remove the plug. This should break up any blockages that are mainly fat or oil-based. You can repeat this a number of times if the blockage is stubborn.

If you have a double sink, first seal off the second side with a wet cloth or a stopper. To use a plunger properly, you’ll need to create a tight seal around the plunger, so fill the side of the sink you intend to plunge with enough water to cover the bell of the plunger. Put the cup firmly over the entire drain opening and plunge vigorously several times. When you hear the suction clear the clog, remove the plunger and flush the drain well with warm water.

Bicarbonate soda and vinegar: Many swear by this combination. Tip about half a cup of bicarb into the drain and then pour in the vinegar. It should start to froth and bubble and it is this action which can work on some blockages. Leave it to do its magic for about half an hour before using the pipe. Of course, if the trouble is deep within the drain this may not work as the effervescent action will cease in water

Using equipment: There are then things like drain snakes. A drain snake can damage some pipes, however, so you should only use this if you have been trained in their use. A home remedy many uses for drains blocked near the entry to the pipe is a wire coat hanger. Simply unfurl the wire, form into a hook and try to fish out the gunk (usually hair and grease) blocking the drain.

Unscrewing the P-trap: If you think the blockage might be in the kitchen drain’s P-trap (the curve of the drainpipe under the sink that is usually found inside the cabinet) place a pan or bucket under the drain to catch any water or debris that may fall out. Unfasten the P-trap from the drainpipe and clear out anything that is stuck. Then replace the trap and check that water runs through without leaking.

Toilets are slightly different, in that often people try to put a range of inappropriate items into toilets that simply won’t go through the pipes. Some manage to get through (and then clog up treatment facilities) but most actually result in the property owner needing a blocked drain repair.

Soap and warm water: The soap and water trick is also good for toilets. However, the water should not be quite as hot. Simply fill a bucket with very warm water and add half a cup of dishwashing liquid. Pour it in (with force, in case the blockage is just toilet paper) and cross your fingers. Wear PPE just in case there is a splashback. Again, if the blockage doesn’t clear, simply repeat.

Pulling out the big guns: If nothing else works (or if drain blockages are a regular thing) you should enlist the services of a professional.

If you don’t have someone you know you can trust, check with friends and neighbours for recommendations and read internet reviews of larger companies. Get three quotes from different providers and ensure the drain technician you enlist offers CCTV camera inspections. Make sure they can also offer you pipe relining if needed, as this will avoid the need to have pipes dug up if there are any breakages in the pipe.

This article provides more information about clearing blocked drains or you can contact Nuflow; the ONLY Australian-owned company that provides professional, customised blocked drain solutions.

The Bureau of Meteorology has officially declared that we are...
Read more
Storm season is well and truly here, and at this...
Read more
When a high profile building on the Gold Coast discovered...
Read more