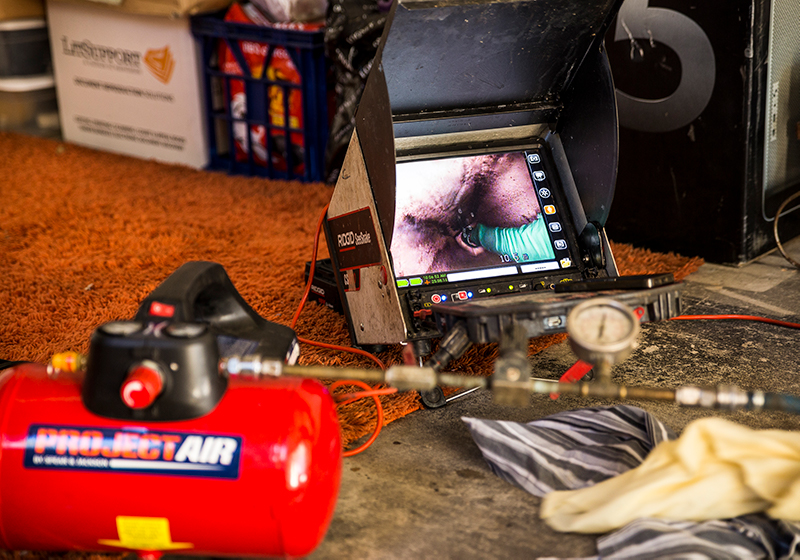 As we wander around the shopping mall in air-conditioned comfort most of us know we’re being watched. And just as closed-circuit television (CCTV) technology is increasingly being used by retailers and business owners to gather evidence of theft and crime, CCTV drain inspections are fast-becoming the most trusted way of getting the ‘inside information’ on what’s going on with a property’s sewer and drainage pipes.

By feeding a tiny camera and LED light into the pipes hidden beneath driveways, gardens and buildings we can see just what’s causing a blockage or break. These images are fed back to a skilled operator and can be viewed (in real time and via a recording) by:

But just how much more information and evidence can this relatively inexpensive investigation provide and in what types of situations does it really earn its keep? This article looks at ten of the most common reasons people have a CCTV pipe investigation carried out and the hidden benefits it can provide.

CCTV drain inspections for blocked drains: before AND after repairs

By far the most common reason for needing a CCTV pipe inspection is to establish the cause of a blockage or breakdown in an underground pipe. As we move more and more toward trenchless (no dig) repair and rehabilitation strategies (such as CIPP relining) it’s only natural that non-invasive and highly accurate inspection techniques (CCTV technologies) are also becoming more popular. A CCTV drain inspection takes the guesswork out of pipe repairs and helps property owners and building managers better plan and budget for work to be done.

Having an inspection prior to repairs commencing helps gather information about the cause and severity of the damage, investigate best practice relining strategies, compare quotes and plan works. The post-reline or repair inspection can be used for insurance and warranty purposes and gives the property owner peace of mind the repair has been carried out correctly.

Even with no obvious signs of a blockage or break, small cracks in pipes can be allowing waste seepage to occur, soil to enter pipes and drains to empty more slowly. There can also be signs of corrosion (in metal pipes), buildups of oils and fats or minor invasions of vegetation roots, all of which could cause a complete break in the future if left unattended. Many companies offering CCTV pipe inspections also provide drain cleaning and relining for areas of damage, meaning small issues can be dealt with before major problems arise. Having a regular pipe inspection (perhaps annually for a busy household of 4-6 people) can help you monitor pipe conditions and avoid expensive unanticipated breakdowns.

Proving fault is extremely difficult for landlords when it comes to pipes hidden out of sight. A landlord may suspect a tenant has been careless in what they’ve thrown down the toilet or kitchen sink and blocked the pipes, but without some form of evidence those accusations can easily be argued away in a tribunal. How do you know the cotton buds clogging the sewer junction weren’t accumulating there for years, for example, or that whether the pipe cracked because they blocked it up with a nappy? The only real way a landlord can protect themselves from major pipe repair costs caused by a tenant’s misuse is to have video evidence of the state of the pipe prior to a new tenancy and evidence of how it was left once the tenancy was completed.

A CCTV pipe inspection can provide just such evidence, and can also be useful in making insurance claims or for putting in place a proactive pipe management and maintenance strategy. You can read more about how CCTV drain inspections can be used by landlords in our article, ‘Reducing the cost of blocked and broken sewer pipes in rentals’ (Advice for landlords) here.

And when the shoe’s on the other foot, CCTV pipe inspections can be just as useful for tenants. A tenant who has recently moved into a property and who suspects the pipes and drains have issues can express their concerns to the property owner or manager and ask (in writing) that an inspection be carried out. If they refuse, the tenant could either arrange to have one carried out at their own expense or make it clear (again in writing) that they believe the pipes are blocked or damaged and that they want to be compensated. This will send a clear message to any landlord (who was perhaps hoping to pass the cost of already-existing pipe damage on to the tenant at a later date) that they are prepared for a fight. If the tenant arranges the CCTV pipe inspection at their own cost they will then be able to retain that evidence to produce later to show that it was in fact the landlord who was not maintaining the pipes as required. This would be the tenant’s evidence that fault was not theirs and no bond deduction would result, making the inspection a good investment.

If toilets are blocking, kitchen pipes are slow to drain, smelly, gurgling or knocking, or if there are puddles or musty smells in carpets or on walls, there could be an issue that requires investigation and a CCTV pipe inspection should be carried out. For more information on the signs of blocked or broken pipes, see our article, ‘Something’s fishy in the kitchen: Common signs of clogged kitchen pipes‘ which was the 2nd in our KITCHEN PIPE HEALTH series of articles.

Another situation in which a CCTV pipe inspection can prove very handy is when you are considering purchasing a new home. Most plumbers will have more than a few tales to tell of excited new home owners who had their dreams shattered once they found out they were up for many thousands of dollars’ worth of unexpected pipe repairs because they failed to have this important element of their home’s structure checked prior to purchase.

A CCTV pipe inspection before settling on a home can be just as important as the pest and building inspection, yet so often it is overlooked or ignored. If damage is identified you can have an estimate of what it will take to be rectified. You can then decide whether you want to ask that this be deducted from the purchase price, repaired by the owner or walk away from the sale. It’s quite likely the owner was aware there were issues and the report from your inspector will make it impossible for them to claim the problems are “minor” or “easy to fix”. Even if the home owner was unaware that there was damage (perhaps a single person living alone and putting little demand on a broken system), unidentified issues will quickly become major issues once a larger family moves in and you need to ensure you are compensated/able to pay for repairs.

The assumption when you buy or move into a brand new home is that the pipes will be in pristine condition and that you won’t have to think about a reline for years. But the reality is that even in new homes things can go wrong. Poorly sealed joins, damage resulting from other stages of construction and incorrect falls or gradients can lead to trouble further down the track.

Getting a CCTV inspection prior to taking ownership of the house (and prior to final payment) can be a great form of insurance and give peace of mind for very little cost. Mention to the inspector that it’s a purely precautionary inspection of brand new pipes and ask whether it could be done at a cheaper rate.

There are three very good reasons for having a CCTV pipe inspection carried out before commencing any renovation work on your property.

It reduces the risk of accidental pipe damage or breakage.
It helps shape more cost-effective renovation plans.
It will most likely be a condition of your building approval application process.

You should have inspections done both before works commence and also once completed. This makes it easier to identify whether the building project has resulted in changes that have damaged the pipes (or which may lead to damage in the future). Many local councils and utility providers offer online tools that help you research drainage and pipe plans relevant to your property. One example, Research my land, can be found here.

And just as you need to get approvals and a CCTV inspection when you’re the one doing the building, if a neighbour is planning to build anywhere near or above your pipes or an easement you should have your own inspection done. Even holes for a new fence or construction of a pool can create shifts in earth forces that can impact pipes. Neighbours carrying out such works are required to get approval (including the CCTV inspection). But if you don’t have a copy of the footage how do you really now it’s been done? Having your own copy of CCTV inspections carried out before and after completion of works could be very helpful in claiming compensation.

Knowing where the pipes run on your property can be pretty handy for all sorts of projects and for future planning. Surprisingly often when homes are first built, pipe networks can be very complex; avoiding areas of rock with sneaky deviations or perhaps not falling as quickly as they should. If it’s an older home and you really have no idea which way the pipes are configured in the ground, a CCTV pipe inspection can give you a much better picture of the ‘lay’ of your land.

In the same way as CCTV drain inspections can help homeowners and landlords, those responsible for the management of multi-dwelling complexes and commercial and public facilities can benefit from regular drain inspections. For more information see our article ‘CCTV pipe inspections saving facility managers $$$ and time’ here.

Nuflow is a highly reputable pipe relining company with the latest CCTV drain inspection equipment to assess the condition of pipes and plan for rehabilitation if required. You can find out more about what we offer here.