The life on a mega yacht is the stuff dreams are made of. Traveling the world, chasing summer and endless seas and beaches. Given the freedom, open air and adventure, seldom do people give thought to super yacht plumbing on such beautiful vessels.

The reality is that these glamourous boats rarely spend more than a few hours in port, and this makes it very difficult to do any major work. However, once or twice a year the super yacht will get time in port when essential maintenance is tightly scheduled into a small window of downtime. 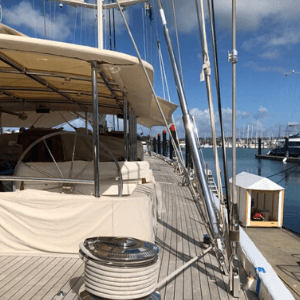 The 50mm aluminium fire suppression pipe system throughout a New Zealand yacht, was found by crew to be corroded and leaking profusely. This pipe system was used daily to clean the deck and it also provided water for firefighting purposes.

The fire suppression system on this mega yacht, draws saltwater into the pipeline from the ocean and the saltwater had badly eaten away at the aluminium pipe causing cracking, holes and scale build up within the pipe.
Worse still, each time the firefighting system was tested it leaked exceedingly within the yacht, causing damage and mess to exquisite finishes and furnishings within the stateroom and other quarters.

With only 14 days in port at Auckland Harbour, until it began its next summer at sea, Nuflow North Harbour were called to inspect and repair the mega yacht.

Although super yacht plumbing was a first for Nuflow North Harbour, they are specialists and highly reputable at pipe relining solutions for all types of pipes including sewer and stormwater. With over 40 years’ experience fixing pipes, when asked to look at the New Zealand yacht, they were enthusiastic to jump aboard and provide the repair solution for the vessel.

Typically, in an aluminium fire service line Nuflow’s Redline Epoxy coating system would be used. However due to the extensive cracks and other concerns, for this vessel’s pipe system, Nuflow’s Blueline structural pipe relining solution was required to rehabilitate the pipe.

The benefit of using Nuflow’s Blueline product was that it increased the effectiveness of fluid flow rate for the pipe, it provided a structural repair, it has greater strength properties than the new pipe and the repair was carried out without any destruction to the luxurious vessel.

Image 1: CCTV inspection of the pipe. Image 2: Liner is inflated during curing process. Image 3: Inside the pipe after relining.

Relining the small 50mm diameter pipe posed some challenges with tight bends on the vessel, unlike sweeping bends in a standard drainage pipe. Nuflow North Harbour ensured they had the right tools to propel the pipe lining within the pipe and were able to enter and exit the bends without getting caught.

In addition, access to the pipeline could only be achieved in a few places as the pipe system was built into the superstructure. However, with smart planning and finesse, the entire system was cleaned, relined and repaired within the limited window of time, ensuring the mega yacht was able to set out to sea as planned.

Pipe relining is a cost effective repair method for super yacht plumbing, as well as water, sewer and stormwater pipes. If you have corroded, blocked or damaged pipes in Auckland or across the southern hemisphere, Nuflow offer a national network of technicians accredited and trained in pipe relining solutions. If you have questions about whether pipe lining is right for your project, contact Nuflow today who will be happy to help.