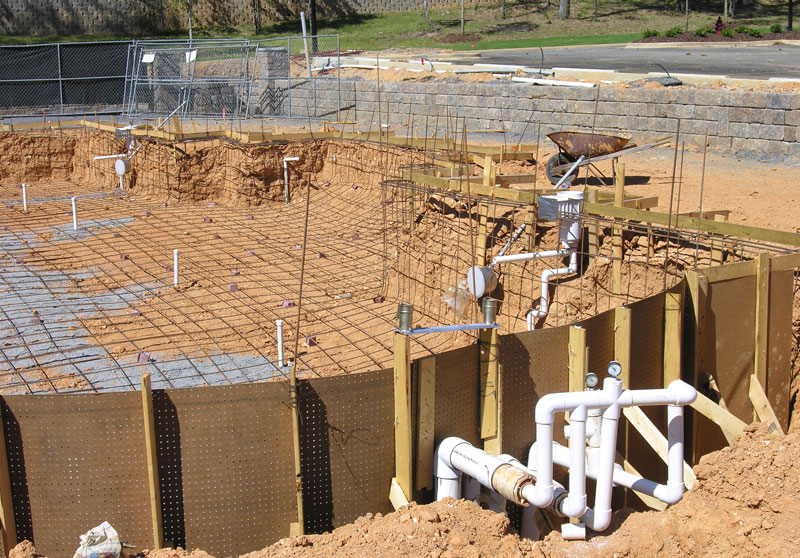 It’s an iconic element of the Australian leisure identity; a summer barbie around the backyard swimming pool. Even in New Zealand, backyard pool ownership rates are surprisingly high – thanks to the wonders of pool heating systems with nearly 10,000 private pools inspected by Auckland Council in 2018 alone.

But as we float beneath the swaying palm fronds intoxicated by the fragrance of the frangipanis and gardenias bordering the path, how much thought do we give to the vital network of pipes below us that keep the whole thing pumping?

This article explains just what types of pipes usually lay under and around backyard or residential complex pools, how to identify whether there’s an issue in one of those pipes, and what to do if repairs are needed.

Who’d put pipes under my swimming pool in the first place? 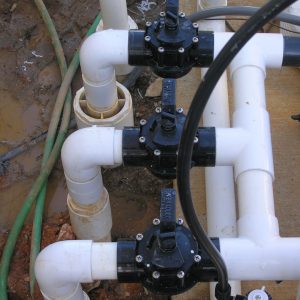 As temperatures rise each summer, many house-hunters in this part of the world have a backyard pool (or room for one) on their list of priorities. When a new house comes complete with the sparkling jewel already installed, it’s easy to forget about technicalities, such as where the pipes have been put, but if you’re having one built in your yard it can suddenly become obvious that a future problem in those pipes could cause headaches.

When Amy and Rob had a pool installed in their Gold Coast hinterland property, complete with spa jets and a water feature, they had no idea how extensive the pipe network required would be.

“I really hadn’t thought about things like pipes,” Amy said.

“I mean I guess if I’d put my mind to it I’d have figure out the water has to get from the filter box to the pump and back again, and that the spa jets needed air and whatever, but I’d been more concerned with things like where I wanted the steps and what colour tiles would work best than to be thinking about pipes.

“When the plumber finished the first stage of his work, however, I remember standing there looking at the network of PVC pipes he’d laid in the dirt under where the pool was going and it suddenly struck me what a nightmare it would be to have to fix one of them if they broke at some point.”

Other reasons you might have broken pipes under a swimming pool

Apart from the pool’s own water and drainage system, there can be complications when above-ground or shallow pools and spas, or even an in-ground pool’s surrounding decking, pergola or paving, are constructed over the top of (or near) existing sewer or storm water drainage pipes.

When drainage plans are out-dated, incorrect or simply ‘missing in action’, pools and other structures can be built above them by subsequent owners, some of whom don’t even give a second thought to where the existing underground services lie.

Even if there is an awareness of the possibility of the new pool being above pipes, some backyards are configured in such a way that there is little option other than to install the pool as planned and hope for the best in terms of whether the pipes will need repairs in the future or not.

Then there’s the issue of what’s planted around the pool. There’s no doubt the landscaping around a pool can often go a long way toward enhancing its exotic or tropical appeal. But sadly, without professional landscaping advice many homeowners fall into the trap of planting certain species of plants that have the ‘look’ and are low maintenance, but which also have highly invasive root systems.

One such example is the hardy almost invincible rubber tree which is seen in many Australian backyards. In dry times, the roots of such trees seek out whatever water sources they can find, and cracks or poorly glued joins in PVC pool pipes can mean they enter and crack those pipes wide open with careless abandon. 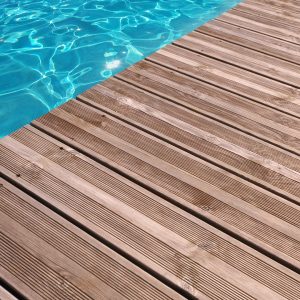 Finally, contemporary urban dwelling trends toward higher-density living, smaller and maintenance-free yards, and high-end, built outdoor entertaining spaces with individualised, boutique pool and spa options and extensive paving and landscaping all add up to increased potential for serious issues when the pipes beneath these spaces fail.

Many inner-city terraces and homes are extending their living spaces by enhancing their yards in this way, with stunning results, but when things go wrong and they find they need a pool pipe repair, or that they have a broken sewer pipe running beneath their much-loved, inground plunge-pool, the consequences can be devastating.

All of the above means it’s important for relevant homeowners to be aware of the warning signs that indicate there could be trouble brewing in the pipes under their pool.

Pools can leak water through any of the pipes, fittings, joins or bends in the plumbing system or through the shell of the pool itself. Broken, blocked or collapsed pipes under or beside swimming pools and their surrounds can be very costly and difficult to identify, because water around a pool is expected. It can take months or even years for someone to recognise that the wet area of deck, garden or paving is there rain, hail or shine and even when no-one’s swum for a week.

But wet areas around the pool aren’t the only way of recognising you might need a pipe repair under your pool.

Signs of a broken or leaking pipe under a swimming pool include:

Water levels will drop naturally as a result of evaporation and pool use, however drops of an inch or more over a week when there has been no pool use usually indicates a problem.

There are professionals who can test for in-ground pool pipe leak repairs using dyes and specialised equipment, but there are also some simple tests you can firstly do yourself, including the bucket test which is performed over two days.

On day one simply place a bucket on a step or ledge inside the pool and fill it with water to the level of the pool. The water inside this bucket will act as your test sample, because it will indicate not only what the level of the pool was prior to running the filter, but also how much water is being lost purely as a result of evaporation. Mark the bucket to the level of the water, then run the filter for a few hours (up to a day) and compare the levels. If there’s a notable difference between how much the level dropped in the bucket, and how much the overall pool level dropped by, you’re losing water from somewhere within the system.

The next step is to determine from where. On the second day do the same thing, but this time without the filter. If the difference in the drop in levels is the same as the day before, then the leak is most likely located in the pool structure itself, but if the difference is smaller (or non-existent) then the leak is probably in the plumbing system and you will need a pool pipe repair.

If things like blocked toilets, slow-draining sinks, gurgling in pipes etc. are occurring in your home and you suspect you might have a blocked or broken drainage or sewer pipe under or near your swimming pool you need to call an expert who can use CCTV and other specialised equipment to identify exactly where the trouble might be.

Repairing leaking or broken pipes under a swimming pool

There are some instances where digging up and repairing a broken pool pipe yourself is possible, however you need to firstly be certain of where the leak is, that there are no electrical or other services you may impact, and that your excavations won’t compromise the structural integrity of the pool or any other retaining walls or built structures nearby.

There are professionals who can usually identify the location of a water leak and consulting an engineer can give you access to advice on impacts to surrounding structures. Plans of the property (either in your possession or with your local council) will often indicate where underground services are located, but if not there are also professionals who can give advice on such things for a fee.

Taking the above into account, if cost is a factor and a broken pool pipe is easily accessible and less than 600mm beneath the soil surface you may want to just dig it up and replace it with a new pipe yourself. If it is a sewer pipe, however, you will also need to take into account health and safety protective equipment.

Repairing broken pipes under a swimming pool with relining

Twenty years ago PVC pool pipe leak repairs or repairs to sewer and drainage pipes under pools were highly disruptive and very costly. Excavation of the pool or the earth immediately surrounding it had the potential to compromise the pool’s walls and the cost of reinstating the area once new pipes were laid was often prohibitive.

But with the advanced composite resin pipe relining alternatives available in Australia and New Zealand today, all types of repairs to pipes under swimming pools can be done with minimal disruption and at usually less cost than traditional dig-and-replace methods.

If a broken pipe is more than four metres from a pool wall, is less than a metre deep and is in an easily accessible area of the yard, you may want to dig it up yourself and replace it with a new pipe, however if it is closer to the pool you should seek the advice and help of professionals to ensure there is no impact upon the stability of the earth supporting the pool.

No-dig pool pipe repairs can be done using existing access points around your pool with no need to dig the earth at all. Once the leak has been identified (often using CCTV equipment) and any earth or material blockages have been cleared, a synthetic liner impregnated with a two-part epoxy resin is lowered into the pipe and pulled into place in the damaged pool pipe using ropes. A bladder inside the liner is then inflated to push it against the inner wall of the damaged pipe and the resin begins to cure, forming a brand new, structurally sound new pipe wall inside the old one.

Nuflow is a highly reputable, Australian-owned company with extensive experience in PVC pool pipe repairs and in relining broken or damaged pipes under swimming pools. The company is regularly contracted by local councils and authorities for repairs to pool pipes at large community and municipal swimming facilities as well as in resorts and commercial hotels. They have fully qualified and thoroughly trained installers who are able to deliver customised solutions for small and large jobs and their projects are backed by guarantees for up to 50 years.

With these types of no-dig pool pipe repairs there is no disturbance to the pool or its surrounds, no mess or costly reinstatement bill and often no need to cease pool use at all, meaning the lazy-day barbies can go on all summer long!

If you have, or suspect you may have, leaking pipes under your pool, contact Nuflow for a no-obligation quote on relining.