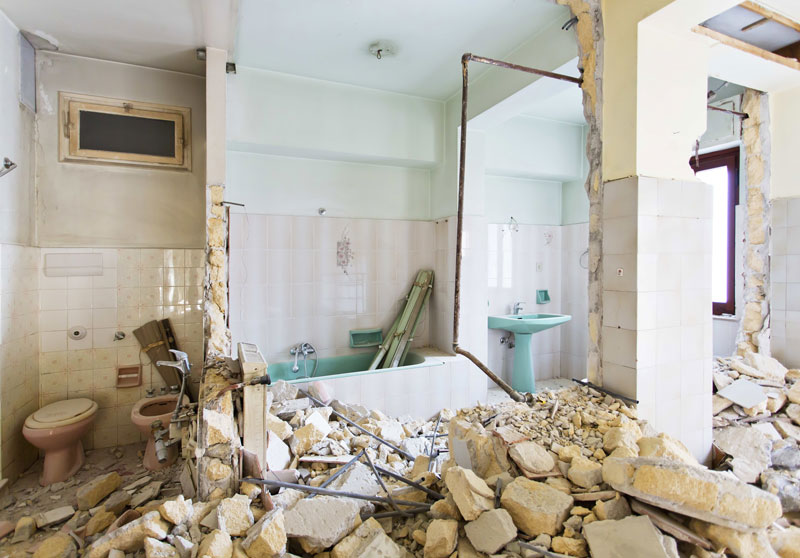 Help! My plumber wants to dig up my bathroom pipes! A week without my bathroom? You’d have to be joking!

Call me precious, but if there’s one thing I simply can’t live without it’s a functioning bathroom. In fact, I might even go so far as to say that just being without my own private little ensuite for a night hastens my heart a few panicked beats. As a kid it was nothing to have to traipse off down the hall and up a couple of shag-pile-covered steps to the family bathroom in the middle of the night, but the older I grew the more acutely aware I became of the need to keep your friends close and your ablution amenities closer.

So it came as no surprise to hear that when Sunshine Coast homeowner, Marion, was told by her plumber that she would have to use her neighbour’s bathroom for at least a week whilst he dug up and repaired a broken drain pipe under her slab she simply refused.

It’s a sad fact, but true, that just like those pipes that have been buried under the retro-orange tiles in your bathroom for 40 years, the human body’s own pipes simply don’t work as efficiently at 70 as they did at age 30. As a result, having quick and easy access to the privacy of your own bathroom as you grow older is more a necessity than a luxury.

Marion made it clear to the plumber that being without her bathroom whilst the pipes were fixed was simply unacceptable. As she explained to him, it wasn’t just about the extra effort or planning that would have to go into every aspect of her day, she was worried about potential embarrassments and what she’d do at 3am if nature called.

So reluctantly, he agreed to investigate other options.

Repairing bathroom pipes under a slab

Avoiding blocked or broken drain pipes in the bathroom may take a little ongoing maintenance (see our article on Simple ways to keep your bathroom pipes working properly), but it’s worth it when one considers the potential stress and costs associated with repairs.

Essentially there are two ways to repair broken or damaged drainage pipes in your bathroom. These are:

In the next section we will give a basic explanation of both these methods and in the final section, some advice on how to best manage whichever choice you make.

In years gone by, digging and replacing pipes was pretty much the only option available to homeowners with under-slab sewer or drainage pipe issues. But thanks to technological advances made over the last few decades, there are now some much simpler and less invasive options to consider. These options use relining technologies to create a smooth new pipe inside the old one.

What is pipe relining?

When people hear the term ‘pipe relining’ they often think it means laying a new pipe along the sewer or drainage line where the old one used to be – but it’s not. Pipe relining solutions are methods of creating new, stronger pipes inside old, broken ones, right where they lay. This means no digging, no hassles and no mess.

Advanced composite resin and fibre technologies (similar to those now being used in the construction of planes, cars, sports equipment and a host of other daily essentials) are being used to create synthetic liners which are then pulled through existing access points with ropes, placed over the damaged section of pipe and cured.

The new epoxy pipe coating basically bonds to the old pipe, making it rock hard and resistant to future breakage; some companies offering warranties of up to 50 years.

The technology has been used successfully throughout the world since the mid-1990s and is becoming so advanced there are now liners strong enough to support large stormwater drains under highways, resistant enough to be used for industrial (chemical and high temperature) purposes and safe enough to reline drinking- water pipes.

The other way to fix a broken drain pipe under a slab is to physically expose the pipe and then mend the break or replace it with new piping (usually PVC pipes).

In a bathroom, this will generally mean cutting through wall or floor tiles (or both), cutting through the concrete house slab beneath, then digging down to find the errant pipe.

This will of course mean the bathroom would be generally off limits for the duration (usually 4 days to 3 weeks), there will be limited or no water supply to the house whilst the pipes are actually being worked on and there will be plenty of noise and dust about the place.

It will also mean quite a hefty labour bill and the cost of retiling once the repair is finished. Finally, there is the concern that whatever caused the damage this time (perhaps a tree root or earth movement) will reoccur in a few years’ time if the same type of PVC pipe is used to replace the old one.

Repairing the broken pipes yourself

If you’re the handy type who likes to get down there and dirty, then whilst not recommended, it is possible and perhaps cheaper to oversee the whole ‘dig-and-replace’ repair process yourself (see our article on ‘Do-it-yourself plumbing repairs’).

You will, however, need to check your local government regulations on plumbing and drainage in your area, and any tile or concrete cutting should only be done by a professional.

How to best manage your chosen pipe repair strategy

Whilst living without your bathroom is certainly possible, for the most part it’s also unpleasant, inconvenient and often embarrassing. For some, however, the challenge of it all is enticing and they embark on the adventure with vigour which usually dissipates around day three.

If this sounds like you and you want to see everything dug up and replaced with new pipes, places like the local gym, swimming pool or camping store can be invaluable resources. For more advice on ways you can make life a little easier whilst living without a bathroom, read of our article on ‘Ten ways to survive life without a bathroom (just!)’.

But if, like Marion, learning about pipe relining seems akin to a miracle being placed at your feet, there are still some steps to be taken to ensure a trouble-free repair.

Firstly and most importantly ensure you engage a highly-qualified and well-reputed relining installer whose company offers lengthy and easy-to-action warranties. Ask some plumbers, talk to friends who might have had pipe relining done, and read testimonials and case studies on company websites. Get a few quotes, ask whether they do CCTV inspections of the drains before AND after their work and whether you receive a copy of that footage.

Also ask to see their warranty terms in writing.

When Marion’s plumber got back to her with the relining information and contact details on a reputable local installer, she wasted no time getting them out for a quote. When she told them about her dread of losing access to the bathroom, they inspected the damage with their CCTV equipment, gave her a set price and assured her they could be in an out while she was doing her weekly shop.

Justin, who is a fully qualified reline installer with a highly-respected Australian company, said that whilst most plumbers knew about relining, few are up to date on just how much can be done with the new composites and liners being developed, and others perhaps prefer to keep jobs for themselves.

“We find we have a lot of situations like that one,” he said.

“A lot of plumbers kind of know about us and they kind of know what we do, but they don’t know the full extent of what relining can achieve.

“Like, we can get people out of some tricky situations.

“We often find when we get to people they’re in a bit of a panic because they’ve found a broken pipe under their slab in their bathroom or lounge room and they’ve been told it’s going to have to be jackhammered up and they’ll have to move out while it’s being done.

“Then when we come along and tell them how we’re just going to use existing access points and possibly be in and out in a day and that they won’t even know we’ve been except for the footage we show them and they’re obviously over the moon.”

Justin said when he first spoke with Marion she was extremely anxious.

“The anxiety that had been put into her head was the big thing,” he said.

“All she wanted to know was that we could fix it and that she wasn’t going to have a massive hole in her bathroom.

“The price worked out for her about the same as what excavating it all conventionally would have been, it was just that firstly she didn’t have to move out of the house or anything, and secondly the reline was done and dusted in a day and all she did was go out for lunch.

“She kept saying to me “Are you sure it’s fixed?” and I told her we hadn’t just been sitting there having smoko.

“When she just kept asking how we’d managed to do it so quickly and without leaving any mess at all, I gave her a little rundown and she couldn’t believe it; she still can’t believe it.

“I showed her the footage and the paperwork showing how it was all covered in the warranty and that gave her peace of mind as well.

“Eventually she just beamed a great big smile and thanked us.”

So deciding on the best pipe repair strategy for your bathroom is not as hard as it seems. If concrete and tile cutting and replacement is required, as well as labour and parts, then the cost of digging and replacing is often around the same as the no dig pipe repair options, but without the hassle, inconvenience and embarrassment of living without a bathroom.

From there, only you can decide on just how adventurous you’re willing to be!

To get a no-obligation quote on relining your damaged pipes, get in touch with us via our contact page.