It is a common occurrence for storm water pipes to be hidden within structural columns on high rise buildings. Strata plumbing problems like this are often costly and time consuming to resolve. That is until, Nuflow delivered a smart solution for high rise and multi-dwelling buildings, shaking up industry thinking.

In a job Nuflow St George attended to, the strata manager and strata committee had been plagued by a mysterious leak through the ceiling of a 6th floor apartment.

When their local Sydney plumber finally worked out the offending leak was coming from a 100mm PVC storm water pipe and not the water system, they began to remove the ceiling, attempting to resolve the issue. The plumber discovered that this was not an ordinary fix and simply replacing part of the pipework was not an option, as the pipe was deep within a structural column that bears the load of the building above them and breaking it open was not possible.

It was clear this repair was not going to be straight forward. Engineer approval would be needed to disrupt the structural column and ceiling slab, scaffolding would be required to gain access to the external section of down pipe and not to mention the cost of the repair itself. The strata committee started seeing the escalating costs associated with repairing the pipe via replacement and soon realized they needed another more cost effective, less destructive and disruptive option.

The senior strata community leader contacted Nuflow St George to discuss the job as they had heard of pipe relining and wanted to explore if this was an option. After a brief discussion the local Nuflow team offered to investigate the job as they felt confident of a positive, cost effective outcome.

Having over 20 years’ experience solving strata plumbing problems the Nuflow St George team were awarded the challenging job after demonstrating the cured-in-place-pipe (CIPP) relining method and assuring management it was possible to fix.

Nuflow’s Blueline pipe relining is an environmentally friendly pipe rehabilitation system. There is no excavation or destruction required therefore it causes minimal disturbance and is highly cost effective for pipe repairs in shared buildings, high-rises or multi-dwelling buildings.

Using existing access points, a liner which is impregnated with resin and a deflated bladder is pulled into the pipe and positioned over the damaged area of pipe. The bladder is inflated, pushing the liner against the host pipe and forms the shape of the pipe. The resin then cures, essentially forming a new, strong and permanent pipe inside the old one. 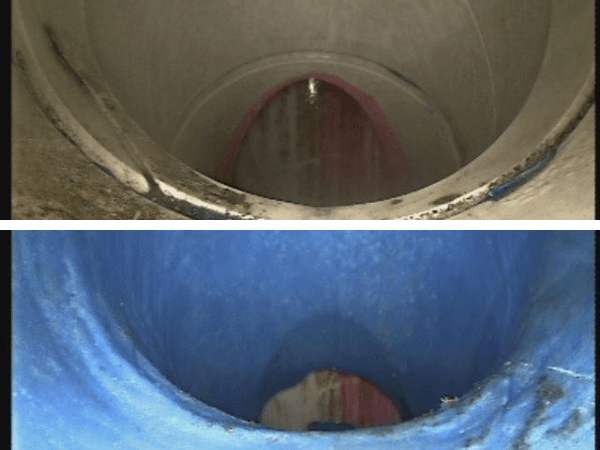 Before showing the crack in the pipe and after the pipe has been relined with Blueline.

Requiring an upstream entry point to the pipe and a downstream access point which were hidden among the structures, made this job extremely difficult, as the two entry points were 8 floors apart. One point was located on the roof of this 8-story apartment block, with the nearest downstream access being in the ceiling space of the ground floor apartment. The cracked pipe was located on the 7th floor. However, using specialised pipe locating equipment carried by the team, the points were easily determined and enabled a flawless repair plan to be executed.

Todd Proctor, Head Reline Technician from Nuflow St George, said ‘With these complexities, this was not a job for an inexperienced team. Once an access point was located in the ceiling space, it was possible to execute a permanent repair using the Blueline Relining System, but it took perseverance and determination by the team”. 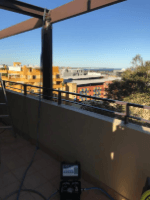 Relining the storm water drain located in a structural column of the building.

The entire operation took place over two days and, by using pipe relining it minimised disruption to any tenants without the usual noisy, dusty and messy smashing of concrete. The pipe relining process eliminated the need for:

This pipe relining solution prevented a costly and lengthy fix that traditional methods of repair would have taken. It also provided peace of mind for the building owners and tenants with a guarantee of up to 50 years.

Servicing strata management and fixing strata plumbing problems with pipe relining is Nuflow’s core focus. If you would like to speak with an accredited and trained Nuflow technician visit https://nuflow.net/find-us/.