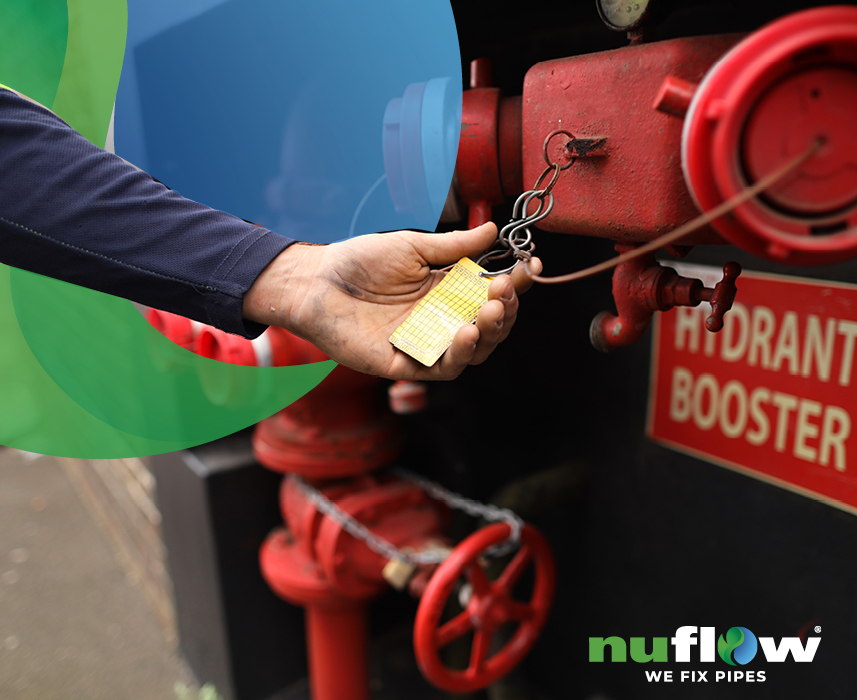 The Hills Norwest Business Park is a large commercial district in Sydney. It’s home to Hillsong Church, Woolworths National office and ResMed to name a few.

So, when Dane from Nuflow Blacktown was contacted by their client Flexco about a potential large-scale issue with a twin pipe fire service feed to their building, he didn’t delay in sending a crew to investigate.

When the team got to site, they found that the water supply had been turned off. They reinstated the water supply to ensure the vital firefighting capability was online should there be an emergency.

The following week, to Dane’s surprise, he got another call to advise the water was off again. It was time to do some homework. Dane spoke with the Sydney water area managers, who advised him of a massive leak in the drain under the road.

THE PROBLEM: LEAK UNDER ROAD NEEDED FIXING WITHOUT SHUTTING DOWN THE ROAD

Flexco has a large-scale facility where they manufacture conveyer belts for the mining industry. When both of their dual private water mains broke, they needed it fixed fast. Without the water main crossing up and running, their site didn’t have any fire protection, which meant they had to stop manufacturing and production.

The factory is located across the road from Hillsong Church, where it’s not unusual for over 16,000 people to visit over a weekend. And during the week, the roads around the site are just as busy. Because of this, the local Hills Council could not give permission to open the road to investigate or repair the leak.

So, what do you do if you can’t repair a pipe leak by digging up the pipe? Situations like this are where pipe relining solutions come into their own.

Dane and Josh from Nuflow Blacktown got busy and decided on a plan with the facility managers from Flexco.

They decided to use Nuflow’s Greenline system to install a structural pipe reline inside the DN150mm copper pipe. Not only would this solve the issue of the leaking pipe, but it would future-proof the pipe against the increased load from the road above, which had seen road traffic increased tenfold over the last decade.

Greenline is a structural relining system that is capable of rehabilitating potable water pipes from DN40mm to DN1m. The system meets international standards and has AS-NZS 4020 approval and no BPA, so water passing over the reline is fit for human consumption.

The team excavated the end of the pipe inside the Flexco site and inspected using CCTV. They found the damaged pipe, and after getting approval opened the path on the opposite side of the road to allow them to access and reline the entire system.

Dane decided the best approach was to do the reline during the evening. The cooled weather gave the team a longer window to do the necessary work and it allowed for the longer run of pipe to be rehabilitated.

All the site and pipe preparation was completed in advance of the reline taking place. The team ensured the pipe was clean and the damage was repaired. Then, on a cold Sydney Winter evening the crew conducted a clinically excellent reline on the pipe. They used vacuum impregnation technology, coupled with a calibration system that ensured the correct amount of resin was spread across every lineal meter of the multi-layered hybrid liner.

When the pipe liner was pulled into place, the bladder inside it was inflated to allow the resin to bond to the existing pipe. Then, once the pipe had cured, the bladder was removed and the pipe was inspected with a drain camera and recommissioned.

This was a challenging job from start to finish, but the crew from Nuflow Blacktown ensured the job was professionally completed with minimal disruption to the busy Norwest Business Park. The road didn’t need to be excavated to expose the damaged pipe, which allowed access to local businesses and met the local council requirements.