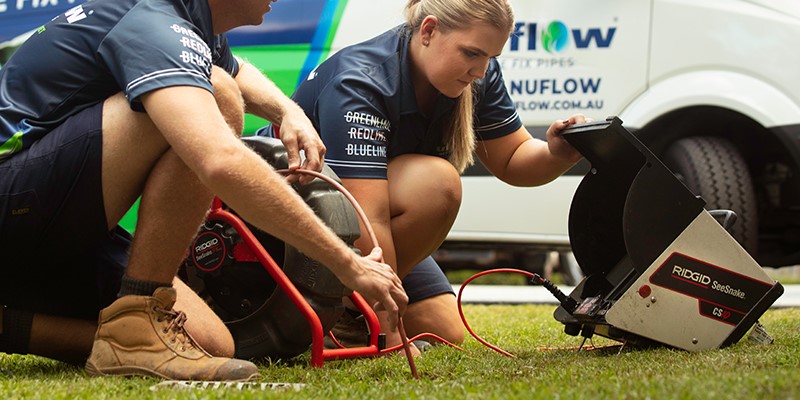 Call it a quirk of (human) nature, throwing caution to the wind, or a case of ignorance is bliss. While most car owners happily get their vehicles to mechanics fairly regularly to keep the pistons firing like new, few of us demonstrate that same dedication when it comes to getting drain inspections done on our homes.

Trends toward increased urban housing density mean smaller blocks with beautifully landscaped and often paved outdoor entertaining areas. That means if something goes wrong with the plumbing pipes, the overall project cost for traditional excavation and replacement methods of repair can be exorbitant.

This article explains why regular sewer, greywater and storm drain inspections using CCTV drain cameras can help you monitor the condition of your household pipes, get on top of looming problems before they become a disaster and reduce repair costs overall.

WHY GET A PLUMBING DRAIN CAMERA INSPECTION?

Many homeowners ignore pipe maintenance because they think they’re fairly capable of handling problems that do arise themselves. But as Ashley Iredale from a consumer group, Choice, advised recently on the Today morning news programs, homeowners are not legally allowed to do anything that involves electrical work or plumbing. He said for such tasks you need to hire a tradesperson.

The show’s host, Karl Stefanovik, admitted he was one of the thousands of Australian homeowners who like to attempt their own plumbing work at home.

“Yeah, I’m good with that kind of thing,” he smiled as co-host, Allison Langdon, relayed his off-screen admission to viewers.

“When something goes wrong with the pipes I like to get involved.”

When Langdon asked how often he had ended up having to call the plumber and pay even more for the job than he would have if he hadn’t tried the DIY option, he said “Almost all the time,” adding, “But I still like to have a go at it; have a crack.

“Get a wrench out, take a pipe out, see what’s there”¦ and then call the plumber,” he chuckled along with the rest of the crew.

In a way it’s understandable. I mean, how hard can it be? It’s just a pipe, after all. Not rocket science. But there’s a reason plumbers can command a fairly decent hourly rate for what they do.

One of the most obvious mistakes many people make when it comes to plumbing is the tendency to try to save money by doing things themselves. This is only made worse by the fact that they usually don’t get a CCTV inspection of the pipes before they get started. A scan of many home renovator forums and chat sites will quickly throw up threads where someone has asked for advice about how to fix a leaking pipe under their driveway, orange grove or bathroom floor. Within hours ‘old mate’ will have a good spread of responses. Off they’ll charge to get the job done, only to return online a day or two later lamenting where things have gone wrong. Invariably somewhere in the thread will be a few (who’ve learned in the past) advising he go straight to his favourite plumber, but such advice is usually ignored. Until finally, at the end of the thread, there comes the admission that the job got too complex and the plumber had to be called.

Trying to maintain or repair pipes without a plumbing drain camera inspection is much like the doctor popping you onto the operating table for a stomach ache without doing an ultrasound or x-ray. It just doesn’t make sense. And if you use CCTV camera inspections to regularly monitor your pipes, you will be able to evaluate changes in pipe health and undertake smaller, inexpensive remedies before things become serious.

HOW CCTV PLUMBING INSPECTIONS SAVE YOU MONEY

A sewer or storm drain inspection can identify:

CCTV drain inspections are fast, accurate, comprehensive, cost-effective, safe, convenient and clean. They are a proactive way to maintain your pipes on a regular basis and they take the guesswork out of any repairs that need to be done. They also mean you will have a permanent record of the pipe condition, which can be shared with different tradespeople for quotes or to be used in comparison from year to year. Our companion article explains these advantages in more detail.

Most reputable drain relining and pipe repair companies offer pipe clearing and CCTV inspections. Before engaging a contractor make sure they are able to offer hydro jet or high-pressure clearing, tree root removal and trenchless CIPP pipe relining if required.

It is also advisable that you ask potential contractors for details on the following:

There is little doubt suburban warriors like Karl will still bravely accept the challenges thrown down before them by the sewer and drainage pipes that keep their kingdoms flowing. There is also little doubt they will continue to look to the wonders of modern, trenchless pipe repair technology and companies like Nuflow to get them out of the sticky situations they get themselves into.

Nuflow is an Australian-owned company based wholly in Australasia offering pipe relining, CCTV pipe inspections and drain cleaning backed by warranties of up to 50 years. They have fully trained and qualified drain inspection technicians with some of the smartest equipment to determine what the most appropriate pipe clearing or repair strategy for your situation will be.

You can get more information to help you decide on a drain inspection supplier here.