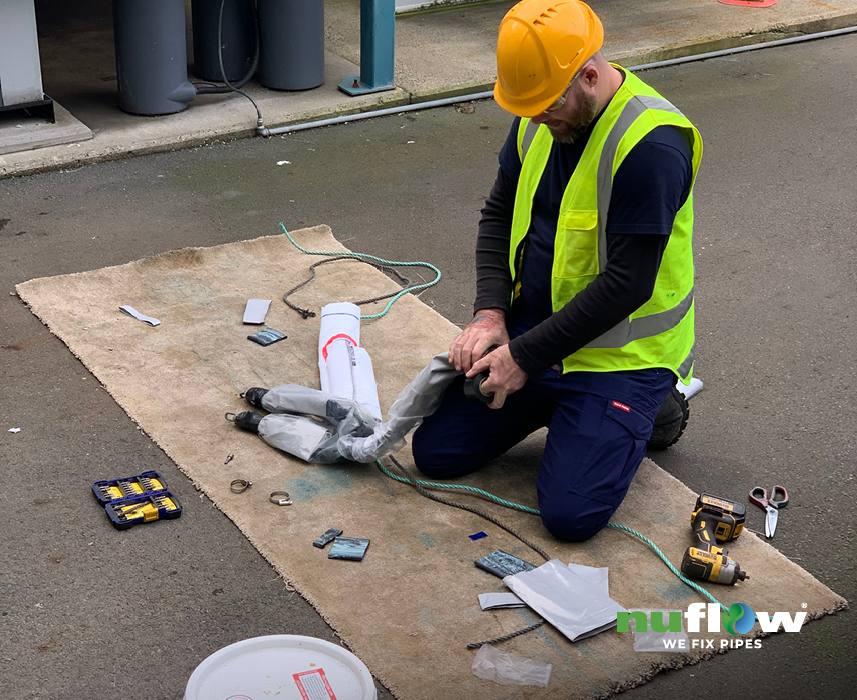 Equipment maintenance is an important part of any business, both for the safety of workers and the longevity of resources. As such an integral component of consistent business operations, it’s vital that these maintenance costs stay manageable.

This was the exact problem facing a North Island gas fired power company in New Zealand. Steel pipes that fed into their gas burner were on their last legs, and replacing all of them was looking to be a time-consuming project with a hefty price tag. With plans to close in the next few years, this option didn’t seem worth the large expense. Luckily for the power company, Nuflow had exactly the solution they needed.

The power station was commissioned back in 1999, and the pipework of their heat recovery steam generator (HRSG) was originally all carbon steel. The HRSG has natural gas duct burners that supply additional heat, so it can create more steam if needed, depending on demand. The problem is, over time the gas path had suffered severe internal corrosion due to condensation from the exhaust gasses. The condensate is acidic, and sits at the bottom of the steel pipe, eating it away.

In the past, the team at the power station had replaced the damages with stainless steel pipes, but the final elbow of the gas path before it enters the burner is difficult to replace. It would have taken about a week to swap just one out, and they were looking at 6 replacements. With the costs of labour, materials, scaffolding, and other miscellaneous add-ons, they would have been looking at a minimum of 6 weeks work, costing them tens of thousands of dollars.

With the power station closing in 3 to 5 years, this expense was just not viable, but hoping the pipes would hold up wasn’t an option either. Left as is, they would undoubtedly corrode through, a safety issue the team wanted to avoid given the high-pressure gas within the pipes.

Senior Mechanical Engineer, Rachelle, knew they needed a natural gas line repair solution that would be a timelier, more cost effective alternative to a full replacement. When she looked into it, she discovered Nuflow’s pipe relining technology, leading her to reach out to the team.

Rachelle explained the situation to Nuflow Wellington owner, Simon, who assessed the best possible solution. The external surface of the elbow closest to the HRSG was about 90°C, and the exhaust gases themselves were 530°C, so Simon knew the solution would have to withstand high temperatures.

He was familiar with HTAR (high temperature, acid resistant) resin, but since it had never been used for this kind of job, he wanted to be sure it was the best option. He contacted Nuflow’s head office and had a chat to the chemist in charge of developing the resins, who was confident that HTAR resin was more than up to the task. So, Simon let Rachelle know that Nuflow had the answer to her problem.

The power station had an annual shut down period in June when all necessary maintenance could be done. Simon and lead installer, Greg, travelled down during this time get the relining sorted. It took a total of two days on site to get all 6, 80ml steel pipe bends relined with the HTAR resin.

In fact, there was only around 3 to 4 hours of work within this time, the bulk of which was on the first day during the installation of the HTAR resin. Day 2 was simply a matter of removing the bladder and trimming it up, leaving the relined gas pipes as good as new.

Rachelle and the whole team at the power station couldn’t have been happier with Nuflow’s gas pipe repair. All maintenance was completed within the shutdown period, and the cost was significantly lower than it would have been for full replacements.

Rachelle even sent through a photo of the gas pipes months after Simon and Greg left, and the relining looked as good as the day it was installed. The power station was seeking something that would have lasted 3 to 5 years, and instead were delivered a solution that will stand the test of time well after the power station shuts down.

This permanent solution meant yet another happy Nuflow customer, who has complete peace of mind that the newly relined pipes won’t be an issue again.

Need a gas pipe reline or something similar? Nuflow has top quality alternatives to replacing pipes, so if you find your business facing maintenance issues, you know exactly who to call. Nuflow can provide long lasting solutions that won’t break your bank, so get in touch with us today.

Pipe relining is a seamless, straightforward answer to plumbing problems...
Read more
Nuflow has the capability to repair all kinds of pipe...
Read more
When a leak was found in the pump outline from...
Read more