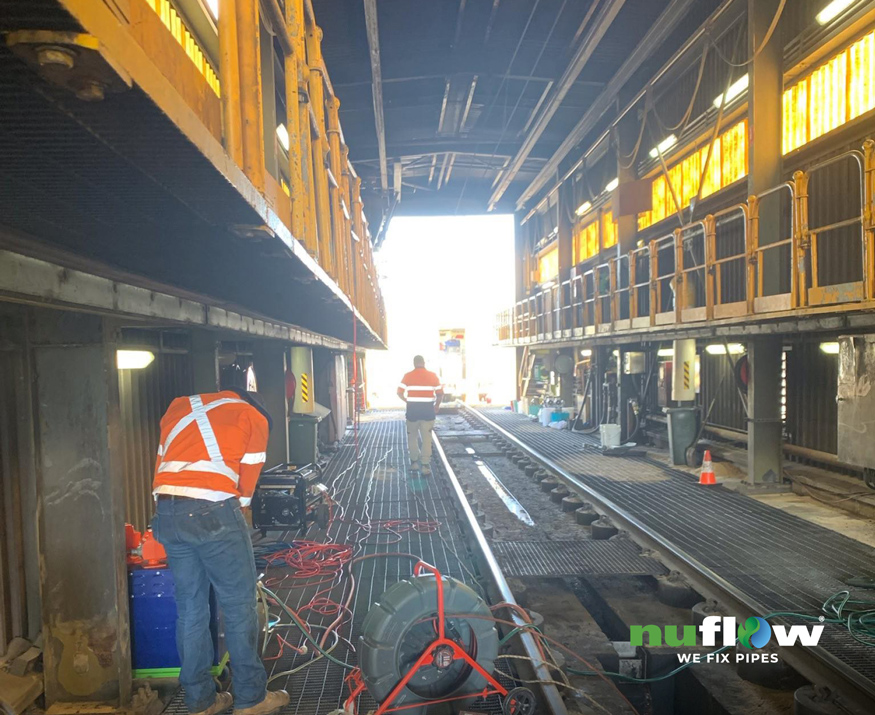 When industrial businesses need plumbing work done, it’s important that the solution is fast and completed to a high standard. This minimises expensive downtime and prevents the same problem recurring a few years down the line, which ultimately inflicts more costs to the business.

That’s why one of our clients, a process system manufacturer, enlisted our help when one of their own industrial clients needed plumbing services at a railway in Port Kembla. When a galvanised steel pipe that fed away the railway’s waste overflow had reached the end of its life, a unique challenge presented itself to the team at Nuflow Wollongong.

Our client knew they could trust Nuflow

Our client had previously contracted Nuflow for a job at the Balmain Ports, where they were very satisfied with the speed in which we completed the work. So, when their customer was having issues with one of their treatment systems and needed an industrial plumbing solution that would get them back up and running fast, they knew that we could help. They reached out to Nuflow Wollongong for their advice on how to get the problem sorted.

Refuelling with abrasive substances had worn down galvanised pipe

The work site was at a Port Kembla railway, where a lot of locomotives come for refuelling. The aging steel pipe in question was in one of their refuelling sheds, which sat in the centre of a big turning base.

These sheds were not just used for diesel, and had another purpose that our technicians had not encountered before. The trains had a separate tank used to hold sand, and that tank was refilled in the same shed. The purpose of the sand was to be shot at the metal rail wheels for grit and traction, particularly when it came to heading up steep hills.

Within the refuelling shed was a channel grate that ran the length of structure, and any sand or diesel overflow would mix together and fall into this grate. From there it was taken by the 40m steel pipe to another pit outside of the shed, where it was then treated.

The pipe was in need of repair due to the abrasive nature of the diesel and sand, which had started eating out the bottom of the pipe, risking leaks into the surrounding sand. If the corroded pipe was to deteriorate to a point where it no longer held liquid, this would become an EPA issue, so it was important that Nuflow Wollongong found a fast and effective solution for leaking steel pipe repair.

Our on-site technicians are supported by a whole team of chemists and engineers. This means that our clients are provided with the combined knowledge of in-field installation specialists, and the experts behind Nuflow’s pipe relining technology. Nuflow Wollongong was able to enlist this support when it came to devising the best solution for the railway’s treatment pipe.

To start with, the Nuflow Wollongong team completed a drain inspection with high definition CCTV cameras to get a clear view of the damage and to diagnose a solution. The technicians saw that the pipe had corroded over time, and it was apparent that it would either need to be completely replaced, or repaired with pipe relining. Because of the abrasiveness of the sand and diesel, the solution would need to be able to handle the impact for the years to come.

The team knew that Nuflow’s high temperature, acid resistant (HTAR) resin could be the answer, but they wanted to be sure – so they reached out to the engineers and chemists at head office. The head office team calculated the longevity of the solution under the specific conditions, and developed a resin with the composition that would have the integrity required to combat the abrasive materials.

This was good news for the owners of the railway, as relining was a much timelier solution than replacing the pipes completely. With a complete pipe replacement, they would have lost the use of their tracks for the time it took to install the new pipe, as well as however long it would take to backfill and reinstall their rail corridors after they were dug up.

There would also have been a lot more variables to consider when it came to excavation, like power, water, and overhead powerlines. Plus, without full use of both sheds they would lose 50% of refilling ability, with massive impacts to their operations.

Instead of dealing with all of that, the Nuflow Wollongong team kept it simple and safe. The job was done in just 3 days, and only limited the use of one rail corridor during that time to get both sheds back in business fast.

The first day involved using the Picote machine to descale the pipe, removing all the rust from the interior so the liner had something to bond to when it was applied. Day 2 was throwing the first 20m of liner down the pipe, and day 3 was spent on the remaining 20m. Croc-seal was used to bind and lock the liner to the grate, and a camera was run back through at the end to make sure everything was looking the way it should. Throughout the duration of the job, the team maintained the strict workplace health and safety guidelines that are necessary when working on such a busy site.

Both our client and their customer were thrilled with Nuflow Wollongong’s work, both for the reduced downtime and impact to operations, as well as for the prevention of what could have been a big environmental issue. Now, they have a pipe as good as new, with a 20 year warranty that gives them peace of mind and confidence in Nuflow’s service.

The experts at Nuflow are backed with on the job knowledge, and have the experience of a whole team behind them ready to solve your pipe problems. If you’re dealing with similar issues, and need a solution that isn’t going to derail all of your processes, get in touch today.