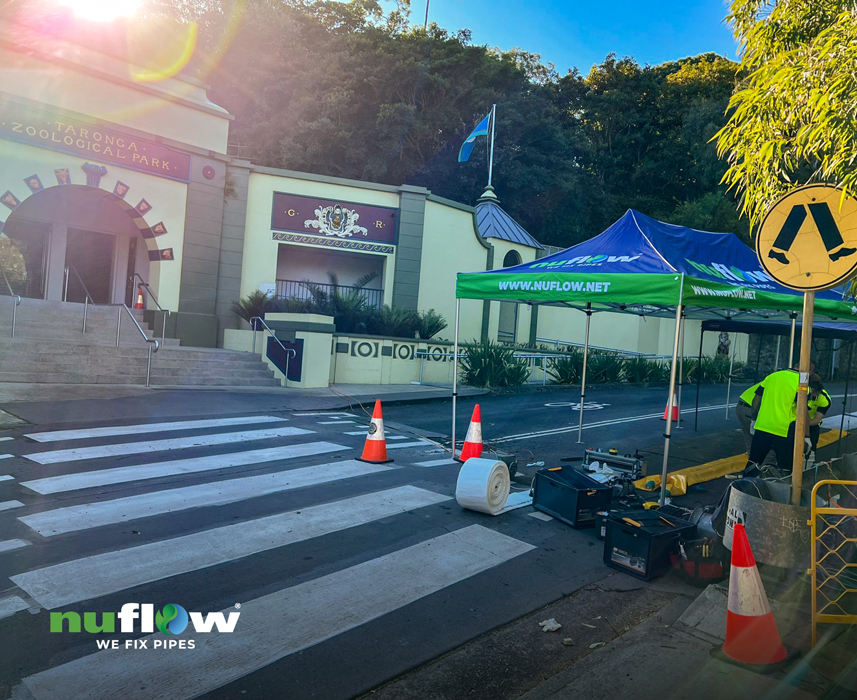 When a leak was found in the pump outline from the seal cove to a pit at the back of Taronga Zoo, a fast and effective solution was needed so Charlie the seal could get his home back ASAP. Luckily, the Nuflow Sydney City team were on the job.

Nuflow has the resources, equipment and innovative plumbing solutions ready to successfully complete a wide range of work at all kinds of job sites. No matter if it’s a residential property with a broken pipe line or a commercial business dealing with a costly leak, we’ve got it covered. In fact, Nuflow Sydney City’s job at Taronga Zoo was a combination of the two – if you consider Charlie’s home a residence, that is.

A local construction company was hard at work installing a desalinisation system amongst the pipework of the seal cove, when they realised water was leaking into the manhole pit behind the zoo. Knowing they needed to find the source of the leak, they drained the seal pool and ran a camera down the 34m run of 190mm steel pipe. That’s when they found the pipeline crack that was causing the leak.

Because the pipe ran under the enclosure, the gift shop, the back entrance of the zoo, as well as the backroad towards the wharf, replacing the pipe wasn’t an option. That level of excavation would have been an extremely costly, time consuming, and disruptive venture – especially with school holidays right around the corner.  Relining was the best option, so the construction company set about finding someone they could count on to complete the job to a high standard and within a tight timeframe.

When a Sydney-based plumbing company was approached for the job, they had to turn it down since they didn’t have the equipment needed to complete a project of that scale. Fortunately, they knew someone who could, and that someone was Nuflow.

Based on this referral, the construction company got in touch with Nuflow Sydney City. They had tried a few other re-liners, but none could make the same promise as Nuflow, and their solution wasn’t able to cap both ends to form a full reline. This is an important distinction, because without lining the pipe flange end that connected to the shut off valve, there was potential for water to get in between the pipe and the relining material, which would cause further leaks.

After hearing what was needed for the job, Nuflow Sydney City’s head re-liner Michael got in touch with Head Office. He worked alongside the head re-liner for special projects to decide how long each section of the reline should be, how to add the pipe flange end, whether to smooth coat, and other important technical elements. After considering a few different methods, they decided that Blueline was the way to go.

Michael recommended this solution to Taronga Zoo and shared all the technical information around it. They were particularly impressed with their plan for the flange end, and the fact that they could make it into a fully encased system. The 50-year warranty didn’t hurt either.

Once everything was approved, the team got to work. The pit where the original leak was identified was the main point of access, meaning the back road it was situated on needed to be shut down, and confined space equipment was required to get the job done.

The first day was spent relining 15m of the pipeline, as well as the flange end. Once the resin was installed and dried, they were able to drill out the holes that would connect it back to the shut off valve. The second day consisted of relining another 17m of the pipe, and the third involved installing a flexi liner on the bend that went up to the pool. The last day was spent smooth coating the top to make it a complete system. In total, 34ml of 190ml Blueline was used, completely customised to the dimensions of the pipe outlay.

Satisfied customers all around

Nuflow Sydney City got the job done just in time for school holidays, with no disruptions to operations, or destruction to any property. If any other company had been on the job, they likely wouldn’t have got it done in time, and a replacement would have been very invasive.

Throughout the job, the construction company was the main point of contact, who reported that working with the team was absolutely seamless. With great communication and constant progress updates, they knew exactly what was happening at all times.

Everyone was thrilled with the final result, with someone in particular especially pleased to have their home back. You can check out Charlie enjoying Nuflow’s work below.

Contact Nuflow for help with your special pipe problems

No matter how obscure or specific your pipe problems are, Nuflow has a solution. We have advanced commercial plumbing solutions at our finger tips, and the whole network is ready to put their heads together and come up with a plan to resolve your unique issue. Get in touch with the team today.

Nuflow has the capability to repair all kinds of pipe...
Read more
There are some common plumbing problems that everyone is likely...
Read more
Equipment maintenance is an important part of any business, both...
Read more