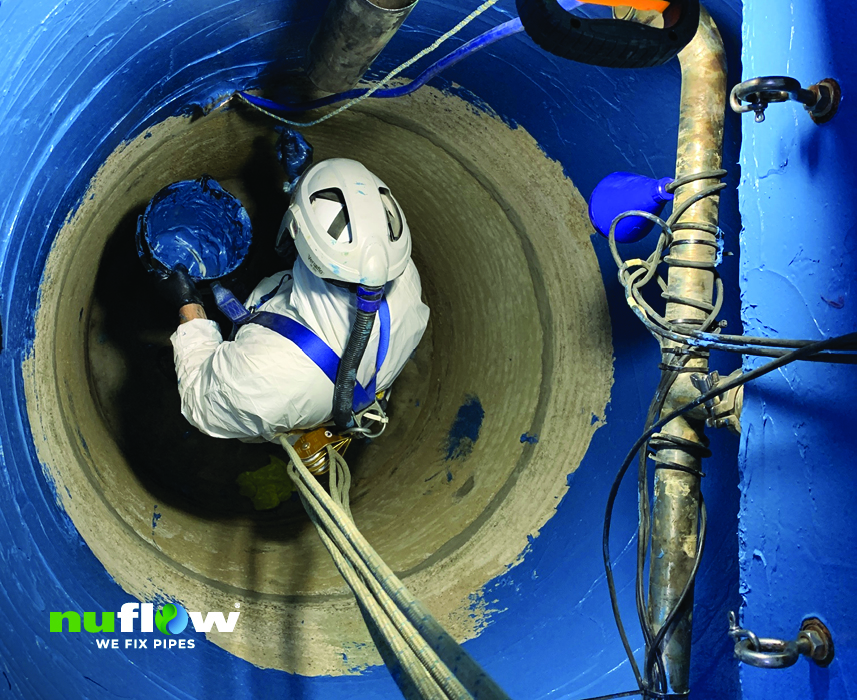 When manholes begin to degrade, they can put additional strain on systems. Recently across Australia we’ve been seeing an increase in requests for manhole repairs and rehabilitation for the council and industrial sectors. Nuflow Perth Central has just completed one such manhole rehabilitation for a pharmaceutical research facility using our pipe relining technology.

Degrading manhole was uncovered on the job

The pharmaceutical research facility had a lot of older copper waste pipes and drains that were deteriorating, causing processed water to leak into the ground. The leaks were due to the processed water inside the pipes being a higher temperature than the pipes themselves, causing erosion to the copper.

Nuflow Perth Central was contracted to use their pipe and drain relining technology to solve this problem and got in to get the job done over three 1-2 week blocks. The last section was done over the Christmas break, and the team, led by Steve Tong, was busy relining the copper pipes with a high temperature, acid resistant resin. It was during this time that technicians noticed the issue with the concrete manhole that the pipes ran into. They quickly raised it with the management team and got to work to solve the problem.

Fixing the messed up manhole

The manhole in question was an old, concrete pit, around 3m deep. The team couldn’t assess the full extent of the internal condition as it was full of liquid at the time, but what they could see at the top was raw, pitted concrete- not a good indicator of the manhole’s integrity.

Because Nuflow is committed to doing the best job possible, the team wanted to make sure they could refurbish the pit along with the pipes. Plus, there was little point repairing the pipes if all the waste was still flowing into a compromised manhole.

So, the team set to work, first by removing the waste from the pit. When it was empty, technicians identified two holes in the side that would have been used to lower the manhole into place when it was installed. The installation holes would have been sealed initially, but have deteriorated over time, so liquid was beginning to leech into the ground underneath.

After a day of emptying and cleaning, technicians used the second day to completely refurbish the manhole using Nuflow’s Smooth Trowel. This process involved one of the pipe relining technicians being lowered into the hole using confined space equipment. Starting at the top, he used Nuflow Smooth Trowel solution all around the interior of the pit. Once the bottom was sealed, he was brought back up and the research facility was left with a completely refurbished manhole.

Nuflow is always prepared and able to adapt, so we were able to complete the job with no problems and still exceed our client’s expectations.  With all of their old pipes and drains relined, plus a problem they didn’t even know they had solved, our client was left very satisfied with Nuflow Perth Central’s work. Major safety and environmental issues may have arisen if this issue was left unresolved, so now they have peace of mind knowing there is no impacts from them or their works on site.

Plus, Nuflow Perth Central offered a 25 year warranty on their relining and refurbishment, so the facility knows their pipes are good, for good.

Looking for manhole rehabilitation? Reach out to Nuflow

No need to install a completely new and very expensive manhole when you spot one in a bad state. Nuflow can save you tonnes of time and money with a simple and easy refurbishment. Talk to the team today.