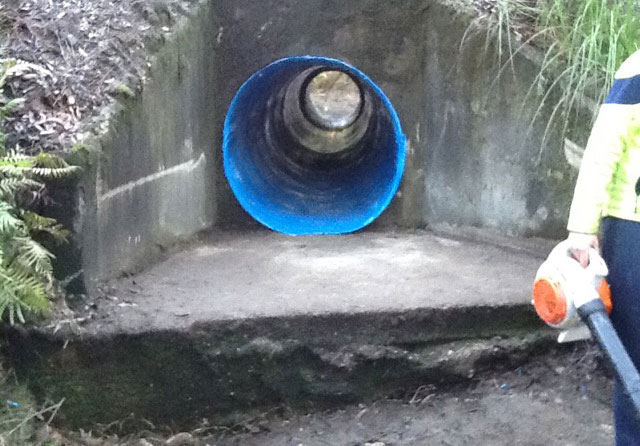 Over time, the bottom of the pipe where water flows corroded and created a hole. This was causing erosion under the road and if left unfixed would eventually cause subsidence – and in the worst case, the road would begin to sink or collapse.

There is only one road into Mallacoota and the broken pipe ran under that main highway. As the only road it’s quite busy. To further complicate the job, the road is situated in a national park, an environmentally sensitive area. There was strictly not to be any disturbance of any of the local flora and fauna.

Relining the pipe was the only solution the traditional dig and replacement of the 1200mm pipe was not an option as closing the road was not possible.

The steel stormwater pipe is located three metres under the road. Excavating this would have required large machines, trench shoring and a large area for waste soil. There was also the added risk of oil and diesel being spilled.

Time would also be an issue with excavating. Digging up the pipe would have taken too much time and caused too much disturbance in an environmentally sensitive area.

The client opted for pipe relining for several reasons, including that the Nuflow vehicle and team has a much smaller footprint than bringing large excavation vehicles onto site, meaning less risk to the local flora and fauna.

The cost of the job was substantially lower than traditional dig and replace.

The steel stormwater pipe was relined with no disturbance to the local national park flora and fauna.

The highway was able to operate a full capacity and motorist would not have even known that the pipe they were driving over was being relined.

The customer engaged Nuflow Southwest Pipe Relining to evaluate the efficiency and quality of the Nuflow system and is happy with the end result.