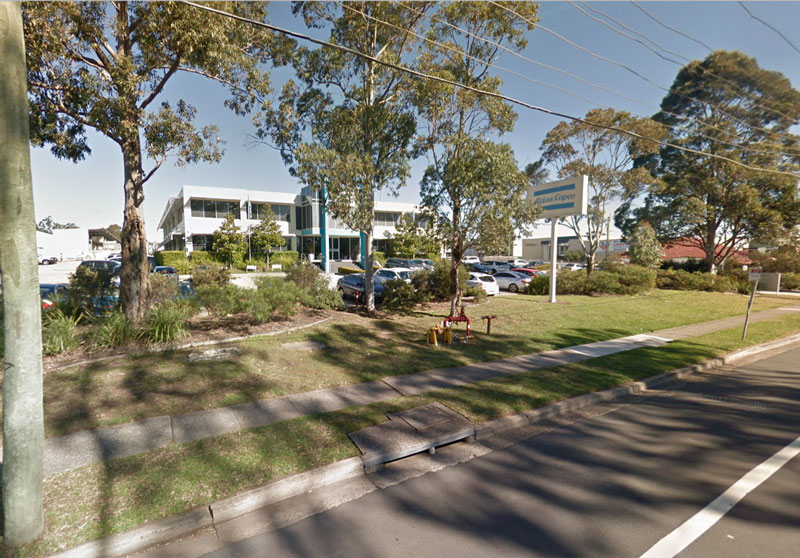 When a busy spare parts distribution centre in Sydney was threatened with closure while fire system supply pipes were replaced, hidden costs were set to double the overall price until facility managers called Nuflow for a pipe repair alternative.

Corrosion and pitting were found in the copper fire main pipe beneath a 150mm to 200 mm-thick concrete slab in the busy delivery and dispatch area of the centre.

Leaks were appearing on the slab and there was increased risk of ongoing leakage or rupture if this problem was not addressed.

Tenants were threatening that compensation would be sought if there was any disruption to the centre’s ability to operate.

Nuflow pipe repair – relined 440 metres of 100mm copper pipe with their Redline epoxyto ensure the ongoing viability of the system.

No excavation was required, no rubbish to be removed, and work in the high-traffic areas of the facility were completed over the weekend, when the facility was not in use.

COST SAVING OVER DIGGING AND REPLACING

A FACILITY MANAGER WITH A BURNING HEADACHE

Ensuring fire protection systems are in good working order is an important area of responsibility for facility managers, but when the often-extensive network of pipes supplying those systems with water start to fail, rectification can be a real headache.
Supply pipes are often difficult to reach; hidden in ceilings, behind walls, under concrete drives and beneath buildings, so in most cases laying new pipes is impractical; not only because of the significant financial cost involved, but also because of the disruption and inconvenience it causes for tenants, user groups and clients.

So when the facility manager at a major commercial distribution centre in Blacktown was told hundreds of metres of pipes, all buried beneath the thick, concrete concourse their tenants relied on each day to function, had reached end of life, they knew they had trouble.

A SMALL POOL OF WATER THAT SPELLED BIG TROUBLE

According to their website, Atlas Copco is a global enterprise leading the way in the supply of industrial productivity solutions. From “state of the art” distribution centres throughout the world, they provide spare parts, heavy machinery and pretty much every type of tool or piece of equipment needed to keep industry functioning.
And with a business reputation founded on the promise of enhancing the availability, speed of delivery and reliability of products, it was no laughing matter when they were told the building they leased for their busy Sydney distribution centre would need to shut down indefinitely for urgent repairs to leaking water pipes in the fire protection system.

Matt Bell, Franchise Manager from Nuflow Technologies, said the trouble first appeared as just a small pool of water that seemed to be coming from beneath the concrete driveway.

“The facility managers had called their maintenance plumber to the premises a few times over previous months because of tiny little leaks around the slab,” Bell said.

“He’d sorted the earlier ones out, hoping they were just a one-off, but when more leaks started to appear he realised something must have been wrong with the pipe system.”

They discovered the issue was corrosion and breakdown in the hundreds of metres of fire protection piping that ran beneath the thick concrete slab used as a roadway every day by the thousands of Atlas Copco trucks delivering and picking up parts from the facility.

The below-ground copper pipes had been laid in somewhat of a ring around the storage facility, obviously to protect the inventory within. But that also meant most of them sat directly underneath the main delivery and dispatch area, which at some point had been fully concreted to improve the efficiency of deliveries. The pipes effectively ran in a straight line for the full length of the delivery area, between where the trucks parked for un/loading and the storage bays housing the parts and equipment they needed to access.

Knowing how quickly an uncontrolled fire at the facility could put lives and productivity at risk, the plumber was asked to give a quote for laying new pipes, but when that price came back, the owners were not impressed.

“Not only was there the cost of replacing the 440 metres of 100mm copper pipe, there was the cost of exposing the pipes so they could remove them, and that meant cutting through a couple of hundred metres of reinforced concrete about 8 inches thick,” Bell said.

“Add to that the labour for the whole thing, plus the enormous cost of re-laying all that concrete once the new pipes had been installed, and disposing of all the waste, and you can see why the estimate for replacement came in at around $650,000.”
However, Bell said cost was only part of the equation.

“But it was the shutdown time that was the deciding factor for the facility managers here,” he said.

“The price was bad enough, but when they learned the site would have to be closed while the excavation and re-lay took place which could run into weeks – they were terribly concerned.

“The centre is set out so that the big semi-trailers and B doubles drive into one driveway, go to the end and turn around and then head back to stop at the relevant bay while the forklifts drive in and out of the bay importing or exporting the parts to or from the truck.

“Where the pipes ran, they would have had to excavate a trench about half a meter wide and a meter and a half deep, and it would have run across the entrances to the full length of storage bays, so the forklifts simply couldn’t have operated safely.”

And with a thousand truck movements each day and Atlas Copco’s reputation (and hence the distribution centre’s operations) relying on fast and frequent load turnarounds, if there was going to be any lost productivity, someone was going to be paying the price.

“And the tenants made it very clear that, that someone wasn’t going to be them,” he said.

“Atlas Copco advised they’d be seeking compensation for any down time at all, which meant if the facility managers decided to excavate and replace the pipes, they would also be racking up a hefty compensation bill that could easily have run into triple figures.”

Faced with this long list of negative consequences of pipe replacement, the managers were desperate, and turned to the plumbing contractor for advice. He told them about information he’d seen on recent developments in pipe relining technologies using composite resin compounds. They asked him to look into it and after some initial research he contacted Nuflow to arrange a site inspection and quote.

At that visit, CCTV pipe inspection camera footage revealed significant pitting and corrosion throughout the system. This rose concerns that the pipe could continue to have small leaks around the site indefinitely and lead to a catastrophic failure of the pipe, which would result in flooding, expensive emergency plumbing repairs, damage to machinery and stock on site. 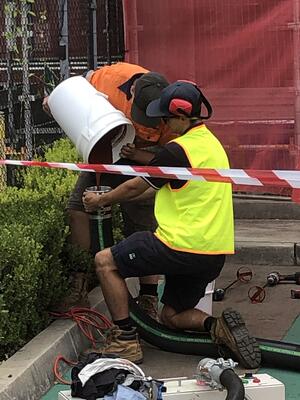 Bell said he knew straight away that Nuflow’s Redline relining products could easily seal the damage, extend the life of the pipes and ensure they operated at the pressure required if needed to fight a fire.

But importantly he also knew that relining really was the best and most cost-effective repair strategy all round, given the limitations they were dealing with at the site.

“Basically we gave them all the answers they were hoping for,” he said.

“Our price came in significantly cheaper than what new pipes were going to cost them, our Redline pipe repair products were fully approved for high pressure fire system and potable water pipes, and importantly, we could get the job done without them losing a single day of production.

“To say they were happy would be an understatement, but they were very clear that we would only have a very strict window of time in which the job could be done, and that if we couldn’t deliver we’d be liable for costs.

“Together, we worked out a plan that enabled us to do all we needed to do in the high-traffic dispatch and delivery area over the weekend when the place didn’t operate, and then the areas out the back where vehicles didn’t go on the Monday and Tuesday.” 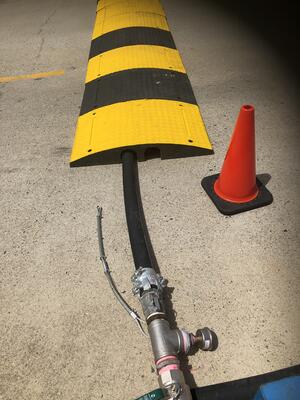 With time being of the essence, the Nuflow team set about ensuring the equipment, materials and staff needed were all on hand.

“We always put a lot of effort into our planning and preparation to make sure we get things right on the day,” Bell said.

“On the Saturday we had a team come in and start cleaning the pipes and by Monday morning when the trucks started rolling in we’d finished all the high-traffic areas and were already working out the back where we didn’t impact their flow.

“It went like clockwork and they were very impressed.

So impressed, Bell said, that the plumber who’d contacted them was now considering adding a Nuflow installation franchise to his own business model.

“He watched the whole operation and saw how incredibly well our processes and products worked,” he said.

“He’s a very busy contract plumber who sees lots of these types of situations in residential and commercial facilities where laying new pipes is just ridiculously expensive and disruptive or completely out of the question.

“He saw that our way of doing things is the way of the future, and he wants to come on board so he can help other customers in similar situations.

WHERE OTHERS GO WRONG

Bell said that as with this job, it’s the hidden extra costs associated with laying new pipes that hurt the most. 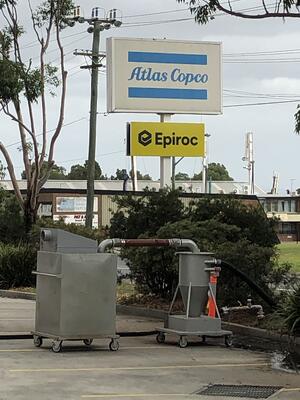 “That’s what a lot of people don’t realise,” he shakes his head.

“Sure, the cost of traditional pipe relaying is about the same as our relining processes, but then you’ve got all the preparation and excavation costs at the start, and the bill for getting everything functioning properly again afterwards.

“That’s what makes pipe relining for pipe repairs such a cost-effective alternative because with relining you don’t have to destroy anything.

“There’s nothing to dig up, no rubbish to dispose of, and no rectification bill at the end.

“If they’d re-piped this job they’d have had the cutting and then they’d have had to put all the road base in on top of the new pipes, compact it down, pour concrete in and have the guys finish it all off, which would have been a huge additional cost.”

There is also the issue of the life expectancy of the new pipe being installed, which for in-ground copper pipes with acidic or aggressive water or soil might only be twenty years.

“But by using Nuflow pipe repair solutions to reline their pipes they saved about 50 per cent on the original quote. They got a 50-year guarantee on the job and didn’t lose a single day of productivity,” Bell said.

“So yes”¦. they were definitely happy.”

There are some common plumbing problems that everyone is likely...
Read more
Equipment maintenance is an important part of any business, both...
Read more
Nuflow Australasia is excited to announce the launch of Nuflow...
Read more