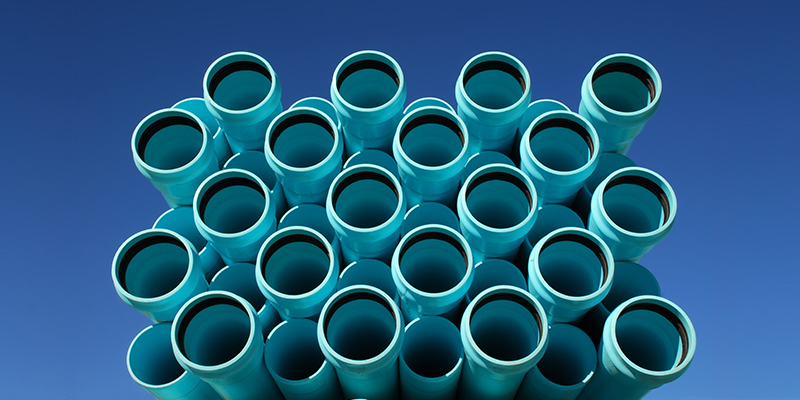 Repairing PVC sewer pipes is relatively simple. But there is some seriously murky water around what people are and are not permitted to do when it comes to their household plumbing.

This article will look at some of the temporary and more permanent ways to fix PVC pipes. It will also consider what plumbing tasks people without a plumbing license can carry out in Australia, and offer some advice about how to repair PVC sewer pipes legally with the help of a professional.

Some people joke that the best way to repair a PVC sewer pipe is to call a plumber. But there’s a lot more truth to this rumour than many realise.

Most new plumbing in Australia today uses polyvinyl chloride a hard, durable type of plastic commonly known as PVC. PVC pipes (usually white or cream) are easy to install, relatively inexpensive and quite resistant to tree root invasion. Because of this, they are one of the most widely used types of plastic plumbing pipe in the world. When these pipes are subjected to forces of nature, extremes of heat or cold or greater pressure than they were manufactured to withstand, they split and crack.

A crack at one point in a pipe system does not necessarily mean the whole thing needs to be replaced. Cutting damaged sections of pipe to replace them with new PVC couplings and pipe lengths is relatively easy.

There are problems, however, with repairing PVC sewer pipes in that people without the necessary training and licensing are not allowed to work on sewer pipes in Australia. Sewer pipes carry household waste from toilet fittings to local government sewer mains which transfer the waste to treatment facilities. Wastewater from showers, hand basins and baths can also flow into the sewer pipes. This means PVC sewer pipes are likely to contain thousands of germs and bacteria. As a result, there are health and safety implications for property residents as well as neighbours and the wider community if people without the proper training and qualifications work on sewer pipes.

If you are having issues with your sewer pipes, you can check the sewer inspection openings (IOs) on your property. According to the City of Gold Coast, IOs have covered holes in sewer pipes which allow access to the inside of the pipe so that blockages can be cleared. If there is a sewer blockage on your property, they suggest you locate the inspection outlet (IO) closest to your front or back property line and check if it is holding liquid. If there’s liquid inside the IO shaft, the blockage is most likely in the council’s infrastructure. If the shaft is dry inside, the blockage is most likely on your own property and you will have to call a licensed plumber for advice and a quote for repairs. Check your local authority’s guidelines.

In terms of how to fix PVC pipe generally, there are a number of strategies ranging from a simple application of tape to cutting pipes for more permanent repairs. The following temporary repairs are widely published on the internet and will get you out of trouble until a plumber can attend your property to make more permanent (and legal) repairs.

You can buy various types of heavy-duty, thick, stretchy (gummy) tape at hardware stores designed to temporarily repair PVC pipes. These tapes stick to themselves but they also stretch, allowing you to apply significant compression to the repair.

Coming in either putty or liquid form, these are applied to the damaged section of pipe as directed, leaving the pipe unused while it sets.

This involves the use of a fibreglass cloth which has been pre-soaked with resin. Again this is only temporary and not intended as a permanent fix.

If you have some rubber hose with clamps at each end, this can be wrapped around the damaged pipes and clamped down, compressing the rubber at both ends.

HOW TO FIX PVC PIPES

Once again, it’s important to stress that working on waste PVC pipes is only legal if you are a licensed plumber and drainer in Australia. Permanent repairs should be left to the experts, but what do you do (or not to do) before the plumber arrives if you have a blocked drain?

Tips we suggest are:

Minimise the use of all plumbing

Avoid using the toilet, bath or shower. When you flush, shower or pull the plug on a bath, large volumes of wastewater can cause sewer pipes to surcharge. This surcharge could be inside your house or building.

If you have noticed that part of the plumbing is not blocked you can possibly use these fixtures (sinks, basins, laundry, toilets), as the blockage may be upstream or in a separate sewer line. However, you should check that using these fixtures is not causing the sewer to surcharge outside or in another part of the building.

Do not attempt to clear blocked drains with a garden hose

It is not unusual for plumbers to find a hose stuck in the sewer because the homeowner tried to clear the blockage. This will usually cost more money in the long run and seldom will clear a blocked drain.

Do not try to pour chemicals down a drain

Chemicals that are poured down a drain rarely work and usually just end up costing you money. We have found that some products whilst suggest they clear blocked drains, actually obstruct the pipe worse than the blockage itself.

CAN I REPAIR PVC SEWER PIPES IN AUSTRALIA

As mentioned above, the simple answer to this is no.

Pretty much the only things an unlicensed homeowner is allowed to do in Queensland in terms of their plumbing are the ‘unregulated’ plumbing tasks identified in the Plumbing and Drainage Regulations (2019, p.93) which are:

Homeowners may also be allowed to do work on elements of their stormwater system, but should always check with their local authority first.

In NSW the relevant law for plumbing falls under the Plumbing and Drainage Act NSW 2011. Section 4 details what counts as plumbing work. In short, stormwater and ‘owner/occupier’ work that involves repairing taps or showerheads is about all you’re allowed because they don’t count as plumbing work under the act.

Probably the easiest way to repair PVC sewer pipes or deal with noisy PVC drain pipes is to contact a professional. Advances in composite resin and trenchless plumbing technologies mean it is now quick and easy to fix PVC pipes without the need to cut through house slabs or dig up gardens.

Relining is a simple way to repair breaks in PVC pipes, and with resins that can cure even underwater, there are options to have pipes repaired without any disruption to service or lifestyle.

If you want more information about CIPP relining of PVC pipes, contact Nuflow.