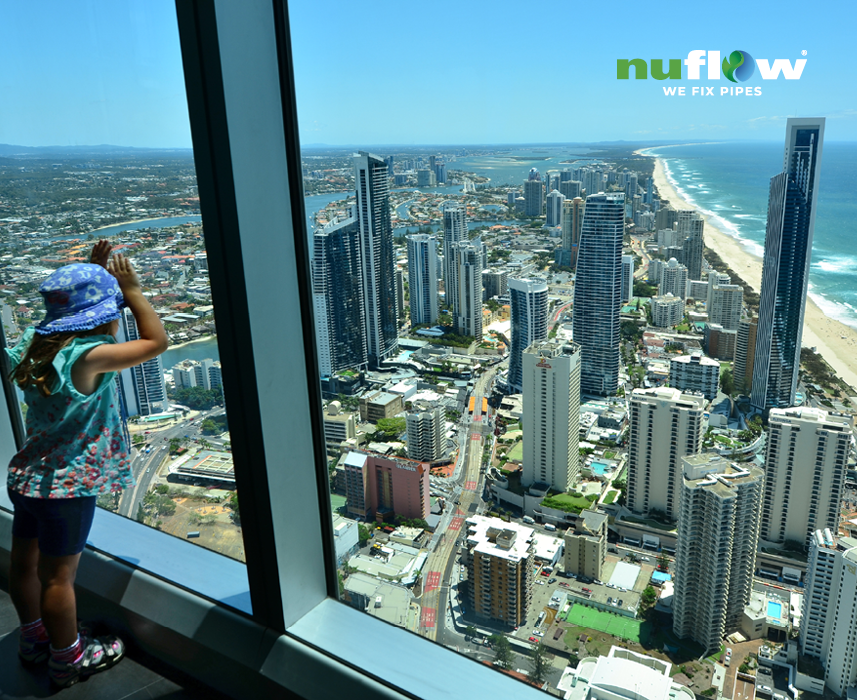 When a high profile building on the Gold Coast discovered a wet spot caused by a pipe leak in between two floors, they knew they had a problem that needed fixing fast. In fact, describing the leak as a wet spot is downplaying the significance. It was such a problem that the facility manager needed to appoint a team member to permanently dry up the leak within a storage area that posed a contamination risk to the items stored in the vicinity.

How to fix a broken pipe inside a wall?

Thanks to the local plumbing team who maintain the building, the source of the leak was located but it was impossible to reach within walls and floors of the building. A traditional plumbing repair would require large sections of floor and wall to be removed to access the pipe, which ran between the 4th and 5th floors.

As a very important venue on the coast, open 7 days a week and closing late, managing how and when the crucial maintenance was going to happen was proving to be a headache. When the potential noise and mess involved in accessing the broken pipe was also thrown into the mix, the facility manager was soon thinking about a far less invasive repair. The plumbing maintenance team recommended the Nuflow Gold Coast team for a non-invasive pipe relining solution.

Huge movement in the pipe was the suspected cause

The pipe itself was a special acoustic piping system called Raupiano plus. It’s a dense polypropylene material that’s designed to eliminate the annoying noise of flushing and running water within buildings. Raupiano pipes utilise a rubber ring joint assembly method for connection, and the leak was coming from a joint that had popped a rubber seal. This is normally a rock-solid system of joining pipes, but after being exposed to huge movement from expansion and contraction it had become an issue.

The leaking pipe was used to convey wastewater from a commercial kitchen, and to remove ice cold water from the chilled water system overflow. It was suspected that the pipe had been continuously expanding during hot water discharge from commercial dishwashers, and then rapidly cooling and contracting with the chilled water. Over time that movement had caused a catastrophic failure of the joint. This in turn began to cause a leak in the ground floor storage area.

The pipe relining technicians at Nuflow Gold Coast knew that Nuflow’s Blueline relining system was the right solution for this job. Not only can Blueline reline PVC, metal, concrete, clay, and even asbestos – but it can also relining Raupiano plus, which was the problem pipe in question.

The Nuflow Gold Coast team arrived on site after hours at 10pm to minimise disruption to the building’s facilities and operations. First up, they used high definition CCTV drain cameras to clearly identify the exact problem joint in the 100mm trade waste pipe. The technicians then constructed the Patented Nuflow Relining system on site to suit the measured specifications exactly.

The installation itself was complicated. To start with, the only way to access the pipes was through a small opening within a kitchen cupboard. The problem joint was located a further 5 metres downstream through multiple joints that lead to the vertical stack pipe that ran down the 5 story building. This meant accuracy of the installation was crucial, or the pipe liner could have slid down 5 floors inside the pipe.

All up, the team relined a 3-meter section of the pipe, which included covering well past the problem in both directions in order to ensure the leak wouldn’t reoccur.

After the pipe was relined, the team used a CCTV drain camera to inspect the finished job as part of the usual process. This footage revealed that a large build up of grease and fat deposits had grown inside the pipes over time and required additional work.

The Nuflow team jumped into action and employed Grease Grenade, a brilliant grease removal system. This clever additive is put directly into a pneumatic high pressure pipe cleaning machine (jetter). The Grease Grenade is then flushed through the pipe under high pressure, and it virtually melts the grease and fat deposits away after a few passes of the jetter nozzle.

After the cleaning took place the team inspected the pipe again. ”It just blasted the fat away with ease,” said Tom, the Nuflow Technician. “We only needed to run the cleaner through the pipe a few times to get the outcome the facility manager wanted.”

Back to business as usual after one night of works

The final result meant that the hazardous leak was repaired over one night, after causing an issue for weeks. Nuflow’s pipe relining technology helped the facility manager fix the problem fast, and without disruption to the building, the kitchen and the staff. The facility manager was also provided with a recording of the CCTV drain inspection for peace of mind that the job had been done right.

If you have an ageing facility or pipes hidden between walls, floors or architecturally made columns, Nuflow can provide the smartest and quickest permanent fix to even the most complicated jobs. Nuflow has teams across Australia and New Zealand, and we’re here to help. Contact your local Nuflow team to find out more about our non-invasive pipe repair systems today.