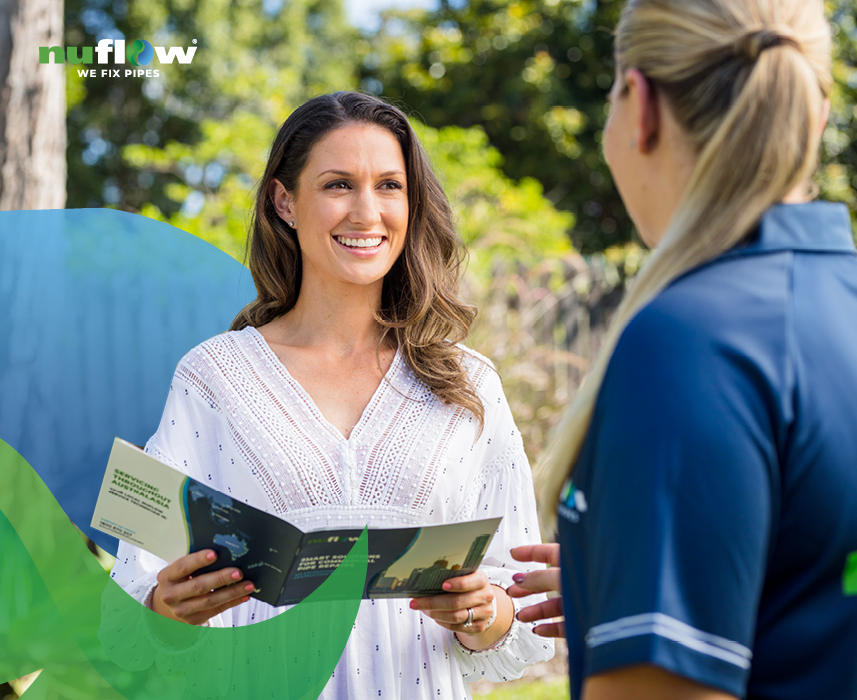 Often, when sewer or stormwater pipes break, they are buried deep underneath your home, driveway or garden. The traditional method of repairing pipes means they would need to be excavated and replaced with new ones – which, depending on where they are located, could involve digging up your well-tended plants, excavating your driveway, or demolishing parts of your home.

Fortunately, pipe relining technology means you don’t need to destroy your pride and joy in order to fix your broken pipes. That’s because the pipe relining method uses your existing plumbing access points in order to repair your pipes from the inside, with no digging or demolishing.

How can pipe relining technology help you repair pipes without digging?

Because pipe relining is a non-invasive solution, it doesn’t require destroying your garden or your home to access and repair pipes. Nuflow’s pipe relining technicians use a CCTV drain camera to inspect your pipes and locate any broken areas. Then, they’ll create a custom felt liner which is soaked in epoxy resin. An inflatable bladder is inserted inside the felt liner, and this is then pulled into your pipes using ropes through your existing drain access points.

The bladder is then inflated with air, and the resin seals against your existing pipes and cures over the course of a few hours. Once it’s completely set, our pipe relining technicians remove the inflatable bladder, leaving you with what is essentially a brand new pipe inside your existing broken one. With this method, your garden, driveway, or walls can remain intact – potentially saving you thousands in repairs.

So, how much could pipe relining save you?

It really depends on each job. The cost of pipe relining varies because each solution is custom made to the unique conditions and environment. For example, if the pipes need to withstand high pressure or temperatures, or if they run under a road and need to be structurally sound, this will factor into the price.

Where the savings really comes into play, is in the money you’ll save because you don’t need to rebuild, replant or relandscape – which you would need to do if you went down the traditional path of digging up and replacing your broken pipes.

Many of our pipe relining technicians here at Nuflow are former plumbers with experience in excavating pipes to replace them. We quizzed them on some of the jobs they’ve seen in the past to share some indicative savings.

If your broken pipes are under your pavers

Broken pipes under pavers and driveways are a common plumbing problem we encounter at Nuflow. The traditional method of fixing these pipes would mean excavating, replacing the pipes, and relaying the pavers or concrete, which can quickly add up. Nuflow Sydney City encountered this problem when they were fixing pipes that repeatedly caused unpleasant odours around the home and required specialised cleaning every year.

“Our client suspected their sewer pipes were broken, which was causing a nasty smell. The pipes were underneath sandstone slab pavers, which they had only recently installed as part of their home renovation. They didn’t want to excavate and destroy their new pavers, which would have been costly for them to replace. We used CCTV drain cameras to see where the problem was, and installed our Blueline pipe relining solution without needing to dig up the broken pipes.” – Michael Brock, Nuflow Sydney City

If your broken pipes are under a floor

If you have broken pipes under a floor, the cost of replacing your flooring can vary depending on the materials – wood, tiled, or concrete. The team at Nuflow Cairns encountered a scenario where excavating the floor would have meant replacing expensive mosaic tiling.

“We were working on a multi-million dollar home, and they found there was a star picket inside their pipe running under their kitchen floor. They had expensive mosaic tiling on the floor, and it would have cost them thousands to replace. Instead, we were able to take care of the problem without damaging the floor at all.” – Giles Mackie, Nuflow Cairns

If your broken pipes are under your garden beds

If your sewer system runs under your landscaping and you find it’s broken, digging up your garden beds can be a daunting – and pricey – task. When the managers of an apartment block in the Sunshine Coast found there was a broken sewer line under their carefully tended garden beds, they turned to Nuflow Sunshine Coast for an alternative to destroying their landscaping.

“Using the Nuflow product and system, the client was able to have the sewer line repaired within half the time and without any disruption to the tenants. There was also no costly reinstatement to the landscaping.” – Justin, Nuflow Sunshine Coast

Fix it for good with Nuflow

As well as the financial savings possible with pipe relining, we love telling our clients they won’t need to damage their home to repair their broken pipes. If your pipes are continuously becoming blocked or are broken, our pipe relining technicians can conduct a drain camera inspection to get to the bottom of the problem and fix it for good. Contact your local Nuflow team to find out more about long-lasting plumbing repairs today.