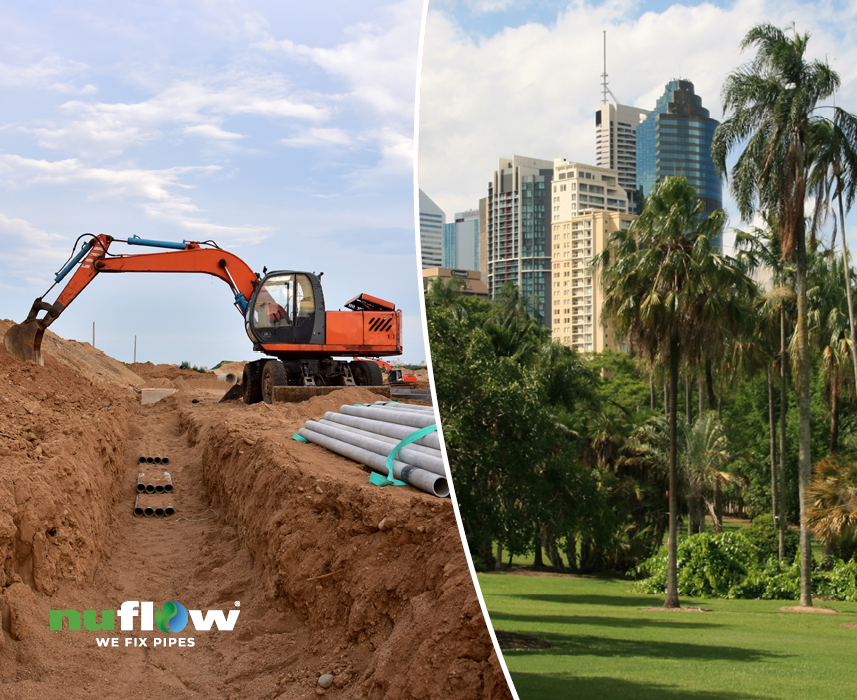 A broken pipe can spell bad news for the environment. It can lead to chemicals or other hazardous materials flowing into soil, water systems or other places it’s not supposed to be, which can create a toxic environment for the local people, plants and animals. Old corroded pipes can also cause dangerous heavy metals to leach into drinking water. Not to mention, broken pipes can cause a whole raft of other problems, which lead to major interruptions to services and daily life.

But the plumbing repairs to fix a broken pipe or drain can sometimes be just as damaging to the environment as the issue itself, causing excess waste, carbon emissions or damage to surrounding areas.

Pipe relining technology is an innovative plumbing solution which repairs pipe issues but has much less of an impact on the environment. Pipe relining is carried out by expert technicians and involves plumbing professionals using a hardy, specialist material to reline the pipe from the inside, sealing off any cracks, without the need to dig or damage the surrounding environment.

Looking for more environmentally friendly plumbing services? Here are some of the reasons pipe relining is an eco plumbing way to fix your broken pipe issues.

Like most repair work, repairing pipes can create lots of waste. The traditional method of repairing pipes means removing old pipes, which will most likely go straight to landfill, and replacing them with new pipes, which require ample energy and resources to create in the first place.

Instead, pipe relining technology is a zero waste solution, which reuses existing pipes and repairs them in place, leaving them possibly even stronger than they were to start with, for many years to come. Plumbing technicians use an advanced composite resin material to repair the pipe from the inside, repairing any damage, improving flow and extending the life of the pipe. They get the most out of the existing pipes, while only using as much relining material is necessary, resulting in no waste at all. The process is suitable for all kinds of pipes, from household non-structural pipes, to structural pipes beneath roads or driveways, and pipes carrying water, waste, storm water, chemical applications, grain or other industrial applications.

The traditional method of repairing broken pipes requires physically digging to access the pipes, whether it’s via earthworks or cutting through a concrete slab or wall. This usually means causing extensive damage to roads, infrastructure, buildings, fences, and driveways, which can require costly repairs, while excavation can sometimes unintentionally cause damage to nearby services which can cause major dramas. Damage to gardens and trees can not only also be costly, it can cause extensive and irreversible damage to natural ecosystems and habitats.

Instead, pipe relining doesn’t require any digging, or damage, at all. The pipe relining process starts with an investigation with a CCTV drain camera through existing access points, allowing your plumbing technician to see exactly where the issue is without digging. Once they know what the issue is and how to fix it, pipe relining is also carried out via existing access points, without the need to dig or cause damage. The pipe relining repairs are then completed with minimal, if any, effect on the surrounding areas, with everything looking just as it did before the repairs once the technician is finished. This means downtime is minimised and any affected people will be able to get back to normal life faster.

Some earthworks and excavation may require the use of heavy machinery, which can create diesel emissions which are harmful to the environment. The equipment used in pipe relining technology is far more eco-friendly and energy efficient, and creates no diesel emissions at all.

Water leaks due to broken pipes are not only expensive, but can cause hundreds or thousands of litres of precious water going to waste. Pipe relining eradicates water waste by sealing any cracks in the pipe, and preventing any damage for many years to come.

This one isn’t necessarily eco-focussed, but is another major benefit to pipe relining technology. The process is cost-effective and repairs the problem the first time. After pipe relining repairs are complete, technicians again use the CCTV drain camera to inspect the pipe to ensure the issue is completely resolved. Pipe relining is also able to be completed with limited interruption to services and minimal downtime. Overall it makes for a quicker, easier and more cost effective solution, which is also environmentally friendly plumbing.

If you’re experiencing ongoing plumbing issues with your busy commercial building, historic building or home, Nuflow can fix it for good, without the need to excavate or demolish your building.