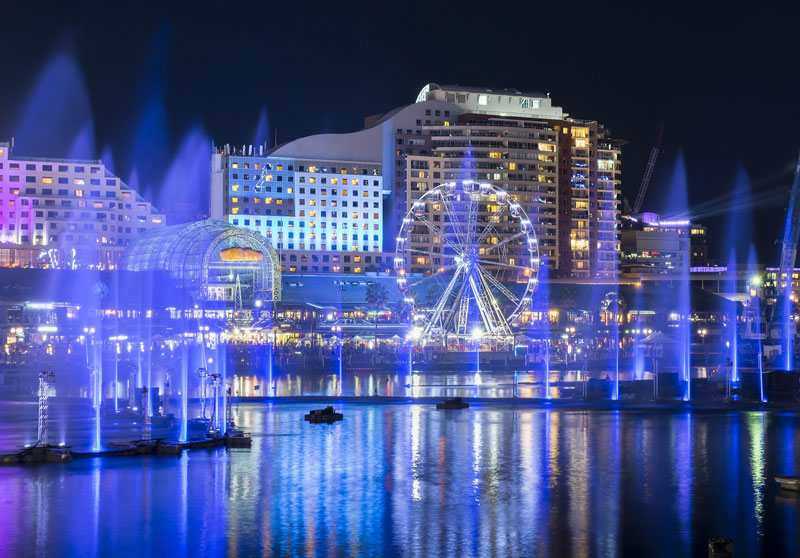 When pressure pipes feeding the multi-million dollar water, laser and digital art feature in one of Sydney’s premier tourist attractions were damaged. Nuflow’s Blueline water pipe lining was the only viable option.

Relining of the seven water pipes with Nuflow’s Blueline system to a depth of one metre.

Time taken to resolve the issue

Six hours in total on site for water pipe lining.

Whilst work on and around the fountain was halted, other work could go on as normal, and once the water pipe lining was complete (half day) all work recommenced and proceeded unhindered.

Approximately 40 per cent (when taking into account lost production, impact on handover schedules and rectification of fittings and linings).

A water feature designed to impress 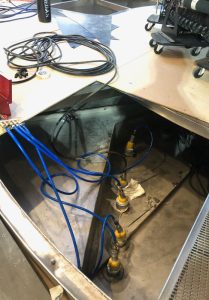 The specially-designed manifold created for the job by the Nuflow technician.

When a leading Sydney tourism destination was unveiled early in 2019, it was hard not to be impressed.

Incorporating a stunning array of lasers and coloured lights, an interactive digital art display, and enough stone and marble to cover about five Olympic swimming pools it was clear no expense had been spared.

But it was the attraction’s centrepiece; a multi-million water feature, that brought the whole show together. From the base of the fountain millions of droplets of water were catapulted skywards under high pressure, with the coloured lights and lasers dancing across them as they fell back down. Behind the feature, a digital screen complimented the display an array of work from local artists and performers.

Overall management of the project had been contracted to leading commercial fit-out specialist, Shape Group. Taking 20 months from design to completion, the unveiling was timed to coincide with the re-opening of an adjoining residential complex which had also undergone a $100 million overhaul. With such huge expenditures at stake, and thousands of visitors expecting to be dazzled by the display each day, there was no margin for error or delays in construction.

The water feature was designed to recycle 13,000 litres of water a day, shooting that water at high pressure up to 20 metres into the air. Hundreds of injectors sat within the base and sent streams of water up at different angles, so when staff discovered that the PVC pipes that would feed the high-pressure water to the injectors had been damaged, there was real concern.

Nuflow’s NSW Franchise Support Manager, Matt Bell, said it appeared the pipes had been damaged during another phase of construction after they’d been installed.

“They’re not certain how it happened, but if they hadn’t noticed it and the pipes had failed after a few months of operation it would have been catastrophic,” he said.

“Even as it was it was a major headache because they were nearly at the end of the project.

“They’d waterproofed and tiled and were in the last stages of finishing off ready for handover and the opening, so digging and replacing the pipes would have caused real problems and a significant blow-out in costs.

“But from what I saw there was no doubt the pipes would have failed at some point. If they’d ignored it and hoped for the best and it had failed in a few months’ time there would have been serious consequences and negative impacts on their reputation, profitability and their overall visitor experience.

“And no-one was going to let that happen.”

Shape Group site manager, Mark Loudon and his team of plumbers and engineers started working on alternatives, but the delays and lack of certainty involved with most meant relining was their only real hope.

“We knew about relining being used in residential applications,” Loudon said, “but as far as pressure water pipes go we’d never done a project where we needed it so we didn’t really know what was possible.”

Loudon said their main concerns were about whether the lining would withstand the pressure.

“We were especially concerned about the fact that we were going to be joining another PVC pipe onto the end of the pressure pipes,” he said.

“So we were worried that with so much water being pushed through under such high pressure it might get in between the lining and the pipe and peel it off.

“So I guess it’s fair to say we were a bit nervous about the whole idea at first.”

But with no other viable options, they searched the internet. They read about what Nuflow could do and about the 50-year warranty they offered and decided it was worth a try.

When Bell got the call from Loudon explaining the situation he responded straight away.

“By sheer coincidence I was at a trade show just around the corner so within an hour I was there to assess what could be done,” he said.

“I could see straight away that the damage to the pipes meant they weren’t going to be able to do the job.

“And because they were already formed into the stainless-steel floor of the fountain and encased in concrete and waterproofing membrane, removal would have been a nightmare.

“I talked to them about other options, but they’d already looked at everything and were backed into a bit of a corner really.

“They could possibly have tried putting a smaller pipe inside the original one, but they needed that certain volume of water at a certain pressure for those injectors to work and if those smaller pipes couldn’t deliver, then the injectors just wouldn’t be able to spray.

“Sure, it would have definitely been the cheapest option by far, but if they found down the track that the water wasn’t getting to the height it needed to be, or if the whole things started leaking, then it was millions of dollars down the drain. So it just wasn’t worth the risk.”

Blueline water pipe lining wins out for its structural integrity

Bell said it was the structural integrity and high-pressure design capabilities of their Blueline system that convinced Loudon Nuflow could do the job.

“Our liners are really just so far ahead of competitors’ products,” he said.

“We have our own team of chemists and engineers who’ve designed them to handle high pressure applications without deteriorating at all.

“Yet they’re incredibly thin and only reduce the internal pipe diameter by about 6mm, which means minimal impact on flow rate and water pressure.

“I genuinely doubt any other relining product in the Australasian market would have had the structural strength to have done this job. Maintaining water-tightness and high pressure for the length of time each day that this fountain is going to be running.

“On top of that we’re very precise with our installation processes and we make certain the new lining’s completely bonded to the host pipe, meaning it won’t peel or flake off.”

With little over a month to the opening, urgent action was needed.

“I told them we could do it, and left them to decide whether to go ahead,” Bell said.

“They’d completed the base of the fountain but they still had to do all the pressure testing and bring all the technology online. The computer systems, the pumps and injectors, the lights and lasers and so on.

“They needed weeks to do all that and they couldn’t start until these pipes were sorted. So unless they wanted to pull up the metres of stainless steel and marble that had been installed, and jack hammer up the concrete – which of course would have meant the job wouldn’t have been ready for handover – we were their only chance.” 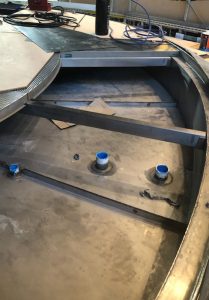 Once Loudon made the call, Nuflow franchise partner, Arthur Kokontis and his team from 24 Seven Plumbing were on the job within days.

A 3m x 3m work area was cordoned off around the fountain ready for the reline, and thanks to some clever planning, on-site equipment was kept to a minimum and work could go on in other areas of the foyer.

Kokontis used Nuflow’s super-fast Blueline resin to speed up curing, and custom designed a manifold that enabled relining of multiple pipes at once.

Bell said this manifold was a stroke of genius on Kokontis’ part.

“Usually we only have one pipe to reline on a job,” he said, “but with this one there were seven pipes pretty much right next to each other; five 100mm pipes and two 50mm pipes.

“Every hour we spent relining meant another hour of lost productivity on the whole attraction, so Kokontis created a manifold with hoses leading to each pipe and attached them all to a regulator, meaning he could inflate all seven bladders inside the liners at once.”

Inflating the bladders forces the liners against the internal walls of the pipe, which initiates the curing of the two-part epoxy resin it’s impregnated with. Therefore, by inflating them all at once he saved even more time.

Bell said each pipe was relined to a depth of one meter, and the whole job was done in half a day.

“Arthur and the 24 Seven guys went onto the site around 6am and by 10am they were pulling the bladders out,” he said.

“They were off site by midday and Loudon’s construction team was able to go full steam ahead finishing off the fountain straight away, only losing about 5 hours’ of productivity.

“They were really happy with what we’d done and yes, they were definitely counting their lucky stars that we’d had the skills and technology they needed, right when they needed it.”

Loudon agrees the job was a resounding success.

“We couldn’t have been happier with the job,” he said.

“We needed them in a bit of an emergency and they came out to the site straight away.

“Originally we thought their Greenline system was the one we needed, but they explained why Blueline would work better and we went with their advice.

“There were no problems whatsoever and I haven’t needed to call them back, so I’d definitely use relining in a similar situation again.

“Basically it all worked perfectly and we’re leak-free which is fantastic.”

Mr Proud is a proud Scotsman and a proud advocate...
Read more
There are some common plumbing problems that everyone is likely...
Read more
Equipment maintenance is an important part of any business, both...
Read more