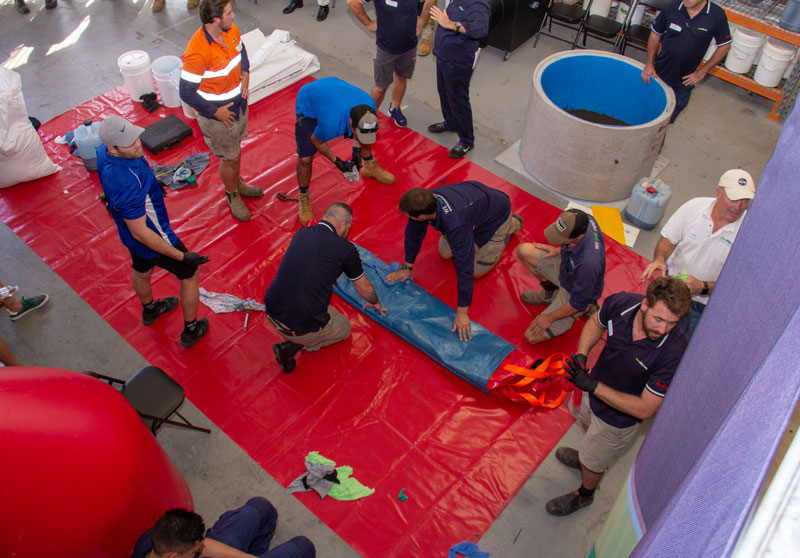 Nuflow is providing asset managers with information they need and quality control for industry with CIPP relining education and training.

For hydraulic engineers, plumbers, town planners and infrastructure/asset managers, the fact that a crisis is looming in terms of the underground pipe systems in most parts of the developed world will come as no surprise. Pipes laid 50 or 60 years ago are failing and creating nightmares not only for those responsible for maintaining that infrastructure, but also for managers of the facilities, homes and businesses those pipes service.

As towns and cities have grown, pipes which were once easily accessible became buried beneath newly-built roads or structures, meaning digging them up and replacing them became unfeasible. But with widespread failure imminent, answers were needed.

For many that answer was to develop ways of creating or installing a new pipe inside the old one without the need to dig things up. Known as trenchless technologies, these solutions are saving facility and asset managers hundreds of thousands of dollars and a lot of stress. But with a host of alternative methods on the market, and scant objective education available, deciding which one will work best in a particular circumstance is fast-becoming the new challenge.

One company, however, is doing what it can to fill that education gap. Nuflow, a fully Australian company which has been operating throughout New Zealand, Australia and Asia for nearly 20 years, uses advanced composite resins to reline broken or leaking pipes without the need to dig. When enquiries about relining increased, along with concerns from those in the field about the lack of education available to them, they developed a Master Class Education program to communicate to the market what was possible.

They’ve also put in place a stringent training and accreditation program in conjunction with TAFE which they require all installers using their products to complete.

This article considers the role of ongoing training, broader industry education and open, honest communication between industry and the market in ensuring pipe repair solution decisions are well-informed, and that resolution strategies are cost effective and appropriate

The development of pipe infrastructure in Australia and New Zealand

In countries like Australia and New Zealand, construction of the infrastructure needed to deliver fresh water for domestic and commercial use, and to remove and treat waste water and sewage, evolved quite slowly and with little planning between European settlement and the end of WW1.

In the years following both World Wars, however, there were periods of rapid development, with the greatest expansion occurring between 1960 and 1980. As cities and regional towns grew, demand for infrastructure upgrades increased, with around 5000 kilometres of pipeline being installed in the 1970s in Australia alone.

Pipe materials such as grey cast iron and asbestos cement make up a large proportion of these pipes, and with an expected lifespan of around 60 years, many are now beginning to fail.

The state of our pipe infrastructure today

According to Engineers Australia there are over $500 billion worth of critical pipe assets in Australia, the UK and the US with most of them underground and sometimes buried in highly aggressive soils that can cause the pipes to fail. They say water authorities around the world are urgently seeking ways to predict where and when critical pipes will fail so that effective, long-term preventative measures can be put in place.

The Australian Government’s 2019 Infrastructure Audit (An Assessment of Australia’s Future Infrastructure Needs) released in June this year makes the point that whilst the water and waste infrastructure in place across the country has served us well, like most parts of the developed world, much of it is fast-approaching ‘end of life’.

The audit states, “”¦with so much of Australia’s water and sewerage network built over the first three-quarters of the twentieth century, utilities are expected to require an increasing level of investment to replace ageing assets” (p.611).

It goes on to say that the timing of repairs is critical. On the one hand, users (consumers) need to be protected from unnecessarily high upfront costs, but at the same time, delaying the renewal of aging assets would result in significantly increased economic cost because of the higher operational and maintenance costs of aging infrastructure and the impact that failures in trunk water and wastewater infrastructure would have, particularly in fast-growing cities.

The report stresses that transparent reporting on the condition of these aging assets is critical to ensuring maintenance and renewal processes are efficient, and that governments, utilities and regulators are accountable for their decisions.

The pipe-repair challenge for facility and asset managers

Given all of the above, those responsible for management of built facilities, water and waste services and local communities are increasingly being called upon to formulate ‘best practice’ solutions that minimise the costs and negative impacts associated with aging and failing pipes.

Even small cracks in pipes can mean loss of water (and higher water bills) or infiltration of dirt, chemicals or sewage into drinking water. Burst mains or broken water pipe repair costs can be significant when taking into account things like road closures, loss of operational income, disruption to users, significant inconvenience, massive water losses and hefty reactive repair bills.

Increasingly, the importance of carrying out proactive pipe assessment and management is being recommended, where realistic assessments of the state of pipes servicing our homes, businesses and facilities are made, and cost-effective management, repair and rehabilitation solutions are implemented.

But even once such assessments are made there is the issue of how best to carry out any necessary repairs or maintenance, when so many of these critical pipes are now situated beneath developed land (roads, homes, businesses etc.).

With traditional pipe repair solutions (excavation and replacement) no longer practical in such circumstances, a diverse range of rehabilitation, reline and repair options that do not require digging, have emerged over the last 30 years. Known as trenchless technologies, these no dig plumbing solutions include slip-lining, cured-in-place pipe (CIPP) relining, horizontal directional drilling, pipe bursting and spray lining.

These new technologies mean less disruption, inconvenience and environmental impact for broken pipes around buildings, roads and sensitive habitats, and are usually more cost-effective than digging, however with little historical local data or objective information upon which to base their decisions, asset and facility managers are often uncertain which option will work best for them under different circumstances and conditions.

It was because of this dearth of information that Nuflow developed its Master Class program. Running since early 2018, over 60 classes have now been conducted in Australia and New Zealand with plans in place to take the program to the other countries later this year.

Jeff Hildtich, National Sales and Operations Manager, oversees the program and has delivered many of the classes.

“The feedback we were getting from the market was that the rate at which technological developments were occurring was making it difficult for field practitioners to comprehensively assess all the options available to them,” he said.

“Effectively this meant there were gaps in information transmission resulting in less-effective resolution strategies in certain circumstances.”

Master Class content addresses such things as sewer, storm water and potable water pipe rehabilitation and maintenance. Information is provided on viable new trenchless alternatives that are less costly, disruptive and time-consuming and which alleviated the need to excavate.

Hilditch says the classes have given planners, engineers, project managers and technical staff the opportunity to come together to ask questions specific to their circumstances.

“Each class is different, depending on what the group is interested in, which industry sector they are from and what is going on in their geographic region,” he said.

“For instance, discussion and education on advancements in technologies around asbestos cement pipe relining for large diameter storm water and sewer pipes is a common theme of New Zealand classes.

“We’ve done classes for engineers and technicians from Auckland Council, Tauranga City Council and Aurecon, as well as independent facility, building and property managers and engineers.”

The classes are designed to operate very much around the concept of two-way feedback, where the Nuflow chemists and technicians are able to listen to what the market is saying they need, and the participants can learn what is possible.

“We’ve found that this program has a whole range of benefits, some of which we hadn’t even anticipated when we first began,” Hilditch said.

“Not only are they significantly improving people’s understanding of what’s possible, but we’ve seen the group setting open up lines of communication between different role-types within organisations who sometimes perhaps don’t get the opportunity to problem-solve together.

“We’ve also seen communication opening up between people from different organisations who suddenly realise they have shared objectives, which in turn stimulates wider discussion about how things can be collectively applied to their specific projects.

“Once we’ve provided them with the information about what’s available and what to look out for when they’re considering their options they’re much more confident about being able to make an informed choice.

“I suppose in a way the classes are an opportunity for continuing professional development, and the accredited training we offer for installers is another way we’re working to bring quality control to this fast-growing industry.”

For more information on our master class program contact us by emailingÂ solutions@nuflow.net