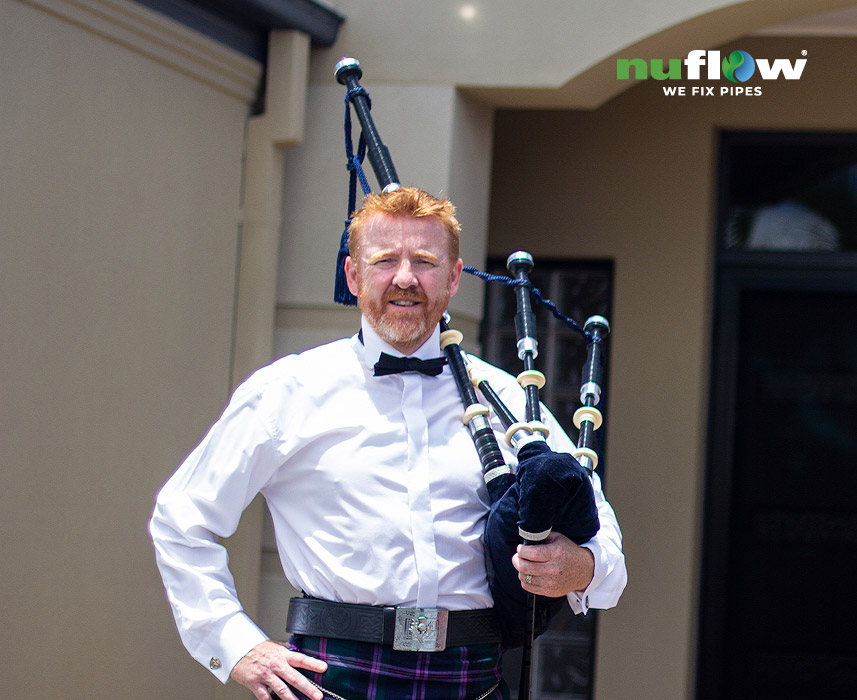 Mr Proud is Nuflow’s biggest advocate. He’s a proud Scotsman – and he’s proud of his home, his family, and the performance he can give you on his bagpipes. Mr Proud’s home is his castle, and you can often find him manicuring his lawn, cleaning his driveway, and meticulously maintaining his roof and gutters.

When something isn’t right or needs repairing, he wastes no time making sure it’s dealt with quickly. So as you can imagine, when he was experiencing issues with recurring blocked pipes he wanted a top notch solution to get his plumbing back to perfect condition.

That’s where Nuflow came in – and why he’s such a big fan! Check out the story of how we got Mr Proud’s pipe dilemmas sorted.

When Mr Proud heard strange sounds coming from his pipes, he suspected there was a blockage somewhere beneath the surface. As a working man, Mr Proud is very busy – but still he rolled up his sleeves and tried fixing his blocked drains himself. When the problem persisted, he even called in the professionals to come in and unblock them.

But a few months later, the problem always seemed to come back.

One morning, he awoke to a nasty smell in his home, and he knew he needed to fix the problem for good. In his experience, fixing pipes meant digging up gardens or demolishing walls, and as a proud man who loves his house and garden this was the last thing he wanted.

So, he turned to trusty Google to see if he could find another less destructive solution.

In Mr Proud’s online research, he uncovered an innovative new pipe repair method called pipe relining. He found that pipe relining was a way to fix broken and blocked pipes without needing to dig or demolish!

Hopeful that this could be the answer to his plumbing woes, Mr Proud called his local Nuflow team. They gave him a run through of how pipe relining could help him get his house back in order, and were super helpful in finding a time to come out and investigate that fit around Mr Proud’s busy schedule.

When the Nuflow team arrived, they used their CCTV pipe inspection and drain camera to pinpoint what was wrong, and identified the issue immediately.

Mr Proud’s house was built a long time ago, and that mean his pipes were aging too. They were cracked and splitting, so they were causing all the blockages Mr Proud had been spending all his time unclogging.

When Nuflow told him that a lot of his pipes would need repairing, he thought his deepest fears were being realised. But the technicians assured the stressed-out Scotsman that they could use pipe relining technology to fix the cracked pipes. Even better, the cost-effective solution could be installed in just a day, and without damaging his home! And with Nuflow’s Australian-made technology, the relined pipes would be even stronger than if they were installed brand new.

Trusting the Nuflow team, Mr Proud watched in awe as the technicians used their pressurised cleaner to clear out everything that blocked his pipes. Then, in his words, “they stuck a thingo down my pipe, it expanded, and fixed it!”

Just like that, the issues that had been plaguing Mr Proud for many months were fixed with no intrusion. Mr Proud now has something else to be proud of, and will tell everyone who will listen how amazing the team at Nuflow are.

Since getting Nuflow in to fix his pipe problems, Mr Proud is living in a whole new world. Instead of being elbow deep in debris, he spends his afternoons giving his family lilting bagpipe renditions.

Mr Proud tells all his friends that they should call Nuflow whenever they’re having any kind of drain or pipe blockages.

“Because,” he says, “Nuflow doesn’t just fix broken and blocked pipes, they fix your pipes for good.”

Ready to find out how Nuflow can help you solve your pipe problems with pipe relining? Talk to your local Nuflow team today to get started.