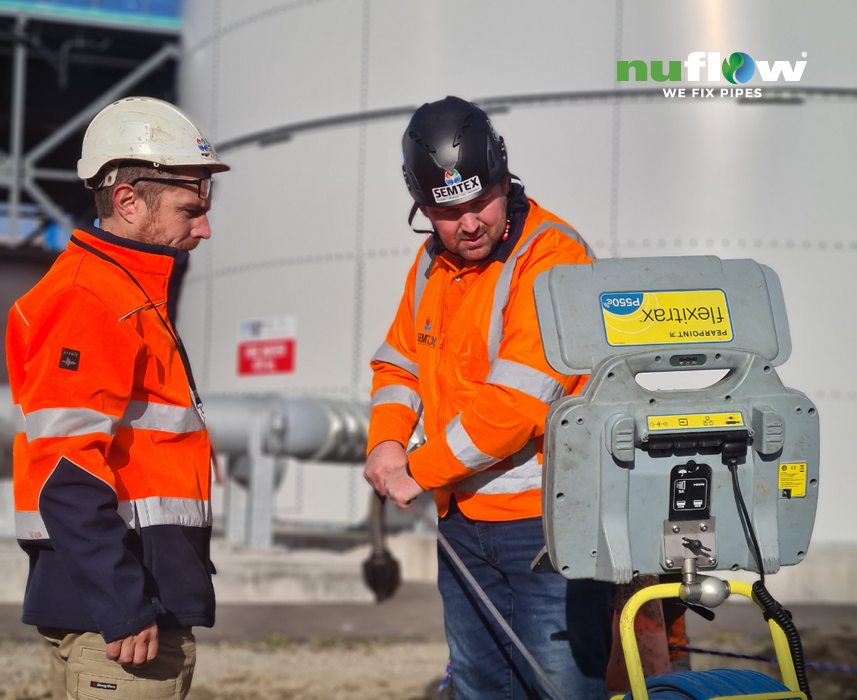 Nuflow has the capability to repair all kinds of pipe infrastructure, no matter the location or job type. So, when Nuflow Manawatu was called to a job on RNZAF Base Ohakea during a massive project for the Royal New Zealand Air Force, they were more than up to the task.

Backdropped by some impressive aircraft and armed with all the safety clearances they required, the team got to work and prevented some potentially disastrous results for the base project with their relining solution.

In 2023, four Poseidon P-8As (P8s) will arrive at the Ohakea base to replace the current aircraft that have been in operation since the 1960s. To house these impressive machines, the construction of two massive 180m x 60m two-storey hangers is currently underway. This $250 million, 400-man project has been dubbed Te Whare Toroa, after the albatross on the crest of the No 5 Squadron who will operate the aircraft.

Construction company, Fulton Hogan, is taking charge of the project, where they will build a heavy-duty tarmac capable of handling four P8s, as well as the platform hanger and taxiway. There is a whole supply chain contributing to the process, with companies hired by Fulton Hogan to handle various elements of the build. One of these is Nuflow Manawatu, who for the past two years has been on site completing a variety of duties around drainage, utilities, and three waters infrastructure.

When undergoing a quality assurance inspection of the stormwater infrastructure before handing that section of the project over, Fulton Hogan noticed a large crack around a section of the 225ml concrete stormwater pipe. This was a huge problem, but luckily, they knew just the company to fix it.

The stormwater pipes in question were placed in between two 100,00L fire tanks that had been built for the new hangers. This meant digging up and replacing the pipes was an unviable option, at least without significant time, manpower, resources and cost involved. Plus, the new planes were expected within a specific timeframe and any delays could majorly impact the schedule. Leaving the pipes wasn’t an option either since, without repairs, the pipe would collapse and be potentially catastrophic for all the new infrastructure.

Fulton Hogan needed an alternative that would be fast, effective, and non-intrusive. The team at Nuflow Manawatu were perfect for the job and a saving grace for a timely solution, since the only other option for the fix would have been an 8 hour drive away.

When Nuflow Manawatu received the official job order, they sent it on to Head Office via the Nuflow Quality Assurance App. From there, Head Office engineers were able to assess the conditions of the job and find the best relining solution to fit the specifications – Sumoline.

Sumoline is Nuflow’s strongest CIPP relining system, and was specifically designed to structurally repair built infrastructure where load-bearing capacity is critical. This makes it ideal for relining stormwater pipes. Plus, the client needed a fully structured reliner, so this was perfect for the job at hand. With its ability to improve flow capacity and infrastructure strength, Fulton Hogan’s engineer was more than happy to approve its implementation.

The construction and general running of the base continued around the team as they completed the stormwater relining, which took three days in total. The first was spent conducting a visit to the site and sending a camera down the pipeline which was accessed through a manhole.

On the second day, a light clean of the pipeline was completed, and a 5m section of Sumoline was installed. After curing for 20hrs, the team came back on the third day to remove the relining equipment and send the camera back down for final checks.

“This was our first time using Sumoline,” says project lead and Nuflow Manawatu owner, Matt Nieper.“It’s always great to have the opportunity to increase the capability of our team, and their experience with Nuflow’s relining process means things went off without a hitch.”

Because of the nature of the job, a high level of safety was required, but every member of the Nuflow team always makes this a high priority. That made it easy to ensure that all appropriate safety measures were in place and the job went smoothly.

Nuflow Manawatu’s fast and efficient relining of the storm drain pipe meant that the project could resume its planned schedule. Everyone involved was thrilled that they could avoid massive costs associated with replacing the pipe and that it could be completely structurally relined with no issue.

Plus, thanks to Nuflow’s quality assurance processes, the client can have peace of mind knowing that every part of the stormwater relining was done to the highest standard. They received both the before and after camera footage, as well as the GPS coordinates of the relined section’s exact location. This, combined with the 50 year warranty on the work, meant that they could rest easy – especially with the arrival of the P8 aircraft imminent.

Are you dealing with a similar issue and don’t want to worry about the expense or disruption of replacing your pipes? No matter if it’s a residential, commercial, or industrial issue, Nuflow has the means to fix things better than new. Get in touch with us today.

When a leak was found in the pump outline from...
Read more
There are some common plumbing problems that everyone is likely...
Read more
Equipment maintenance is an important part of any business, both...
Read more