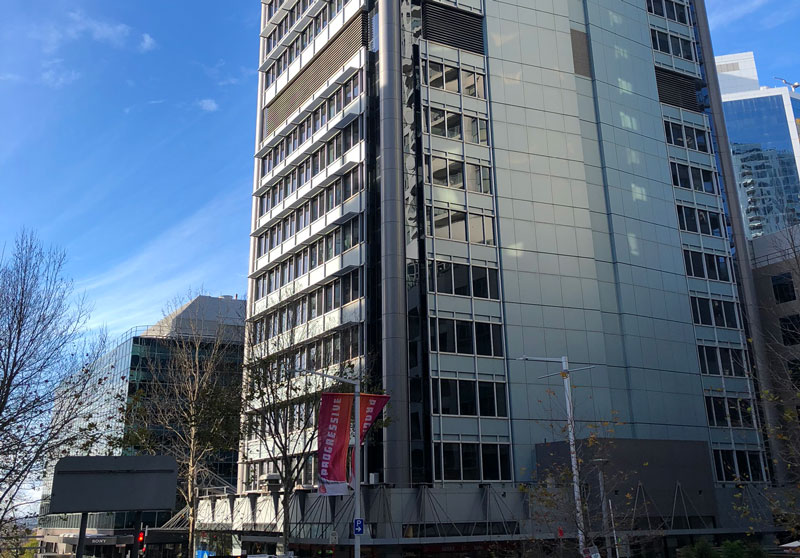 When the fire sprinkler system at the AMP Capitol building in North Sydney failed a pressure test, they knew they had a pipe problem. Due to corrosion in pipes, a simple internet search led building managers to Nuflow pipe repair solutions. Saving them hundreds of thousands of dollars and months of productivity.

A build-up of scale and rust corrosion in 150mm galvanised steel pipes had caused the building to fail a pressure test on its fire sprinkler system.

Time taken to resolve the issue 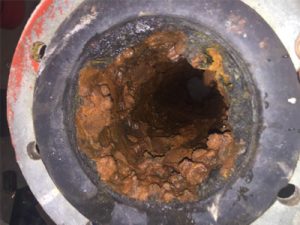 The corroded pipe before any work.

Few images are more chilling than those of people trapped in a fire in a high-rise building. Yet for the millions of people around the world who live in apartment blocks, sleep in towering hotels or work in city skyscrapers every day, that nightmare could easily become a reality if it weren’t for the fire alarm, emergency warning and sprinkler systems that traverse the ceilings and walls.

When the fire sprinkler system at the AMP Capitol office block at North Sydney failed its pressure test because of build-ups of rust and scale in 150mm galvanised steel pipes, the owner gave the building managers verbal approval to remove and replace them.

But when the estimate came back at around $1million, they quickly changed their mind.

Not only was the price tag significantly higher than they’d expected, they’d been told the job of doing a full removal and replacement of the pipes in the 21-storey structure would take two months. This would require that the building be vacated for the entire time.

This would mean disruption of AMP Capitol’s own operations as well as the operations of the many other tenants and businesses in the building. Tenants would have to either be relocated or shut down for the two months. Meaning loss of rental income as well as a range of potential compensation claims.

Nulfow’s Franchise Support Manager, Matt Bell, said it was starting to look like a bit of nightmare for the owners.

“Being told they’d have to find a million dollars out of the blue was bad enough, but with no working fire system you can’t have people in any part of the building, so a staged replacement wasn’t even an option,” he said.

“They decided it was neither logical nor feasible to replace the corroded pipes, and asked building management to find an alternative.

“Someone from the fire inspection and management team had heard about pipe relining technology that could cope with high pressure water applications so they started searching the internet to find out whether anyone in Australia could do it.”

The SOS call came through to Nuflow’s national office in Queensland and once they’d discussed their issues over the phone, an inspection time for a quote was organised.

Remarkably, that quote came in at less than a quarter of the cost of replacing the pipes.

“Of course they were pretty happy, especially when we told them we could do it without any disruption to operations at all, but they still needed approval from AMP because they’d be the ones footing the bill.”

He said Nuflow’s unique product capabilities meant they were really the only company with a viable answer.

“AMP is known for being careful with money and it took them a bit over a year and a half to give us the go-ahead.

“I’ve got no doubt they would have checked out everything else available in that time, both here and overseas, but in the end they must have realised ours was simply the best option.”

With tenants wanting business-as-usual, the Nuflow team established a schedule of works that would start after hours on the Friday and be done by the time workers returned on Monday morning.

The team organised the necessary council and traffic management fees and approvals to set up equipment on the streets and hired additional equipment to speed up installation and curing times.

“We arranged to have four extremely powerful compressors on hand, each one about the size of a 3-tonne truck,” Matt Bell said.

“They were 1050 CFM generators and they were so large we couldn’t get them into the basement of the building so we utilised space around the parking lot and on the edge of the street.

“We came in and started all the prep work on the Friday afternoon and on the Saturday we started cleaning the pipes.”

With very small pipes such as those used in fire systems, the pipes are cleaned by injecting an aggregate of very small aluminium filings into the pipe and blowing them through at speed with compressed air.

A filtration system on the other end of the pipe then captures all the filings, dust and organic debris for safe disposal, ensuring zero environmental impact.

“Once they’re all completely cleared we heat the pipes to make sure they’re at the perfect temperature to receive the resin,” he said.

“We used our non-structural Redline product, because it’s strong enough to handle high-pressure pipes and is also approved for drinking (potable) water.

“We started our first coat of Redline on the Saturday afternoon and went through until we’d lined the pipes on the whole 21 floors including the two basement levels.

“It’s a very large building so we had a big team and everyone worked incredibly hard, because we knew we had to get that first coat in before we knocked off, otherwise it wouldn’t have cured in time.”

Bell said that whilst the Redline was touch dry in two hours, a good 12-hour cure time was needed to make sure the lining was rock hard and fully bonded to the host pipe.

Sunday saw the second coat go on and was left to cure overnight. On the Monday morning the team completed the all-important flow and pressure tests on the lines and packed up their gear as workers began returning to the building, unaware of the major restoration that had taken place in the hidden network of pipes keeping them safe. 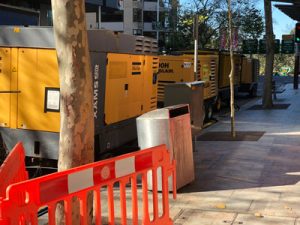 Bell said it was a win-win for everyone.

“So many people don’t know what we can do and people left, right and centre are getting ripped off thinking their only option is to put in new pipes,” he said..

“Not only did we save these clients hundreds of thousands of dollars on the replacement quote and the hassles of 2 months’ worth of worker relocation, but we also guaranteed the job for 50 years.

“That means they’ve got peace of mind for 50 years, whereas if they’d re-plumbed it, they’d only be able to expect the usual 25 years before the same thing happened again.

“They were incredibly happy; not only with the cost savings but with the fact that we delivered everything on time and exactly to plan.”

According to Bell, the problem with fire services is that the pipes have to be steel because of their ability to remain intact for longer periods of intense heat.

“They have to use steel pipes because copper or plastic ones would melt too quickly in a fire, meaning water couldn’t reach the hot spots,” he said.

“Even to this day, brand new buildings are having steel pipes installed but the problem is that they start corroding from the inside pretty much straight away, and with water pipes it happens more quickly because they’re constantly submerged in water.

“The issue is even worse for fire systems because the water doesn’t keep moving like it does for other water pipes, it’s just stagnant ““ so if the pipe hasn’t been lined the water just sits there and corrodes it.”

He says some multi-storey buildings, such as hotels, manage the corrosion issue by replacing all the pipes (sewer, water, fire service and air conditioning) whenever they’re doing small refurbishments, but even then, the cost usually works out higher than what relining them would have been.

“Basically a lot of building managers just don’t realise what we can do,” he said.

“I mean, imagine if that was your building and you spent a million dollars on new pipes and then found out your problems could have been solved more easily and more permanently, and at a saving of $800,000. 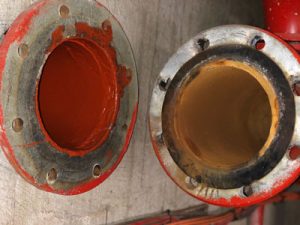 Is your building heritage listed? There are many homes and...
Read more
[caption id="attachment_9172" align="alignright" width="437"] Nuflow's pipe relining solution big success...
Read more
Whilst the general community is finally moving toward the new...
Read more