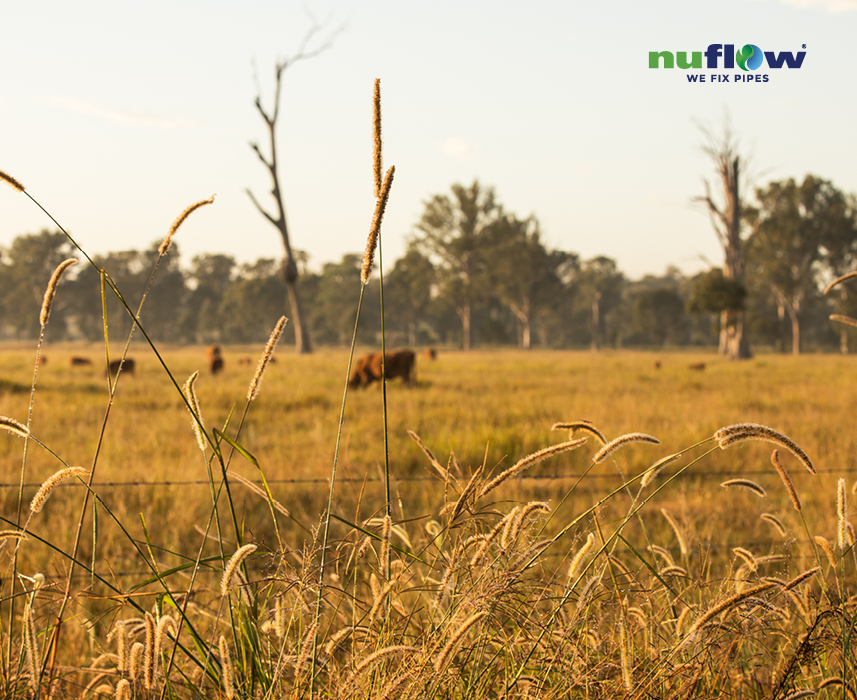 Rolleston is a small town located 355KM west of Gladstone, in the Central Highlands of Central Queensland. The region is best known for its abundance of natural resources and agriculture.

On a remote 30,000 acre rural cattle farm in Rolleston, the property owner discovered a damaged and leaking concrete pipe. The big issue was that the pipe was crucial to the water supply on the farm, as it linked two dams together.

When it was found that the pipe was leaking seriously in multiple locations, the race was on to fix the problem. The farm couldn’t afford to be losing water, especially in a drought when thousands of cattle relied on the dams for survival.

The Problem: Traditional Dig and Replacement of the Pipe wasn’t an Option

The DN650mm pipe was 70 metres long, connecting the two essential water dams. If any damage was made to either dam, there was a possibility they’d be drained entirely. To make things worse, the ground was hard as rock across the whole 70 metre length. So, digging simply wasn’t an option.

Ben from Nuflow Central Queensland quickly responded to the call to get the pipe relined.

“There were a few key challenges. During the day, the temperature was around 43 degrees Celsius. Also, the pipe was under load from the weight of the dam, soil and cattle,” Ben explained.

The solution was to use Nuflow’s Sumoline System. This bigger and stronger relining solution is ideal for pipes under load of buildings, road, rail or even cattle.

Sumoline is the heavyweight in the relining industry and is constructed from a Nuflow patented composite hybrid liner and solid epoxy resins. The system is entirely Australian from the design, through to the engineering and manufacturing.

“Other imported products aren’t designed for our tough Aussie conditions like Nuflow’s are” stated Ben.

The Integrity of the Dams was Maintained

The cost of the job was substantially lower than traditional dig and replacement of the pipe, and there was no disturbance to the dams or the operation of the farm. The job was completed in days, not weeks as might be expected with a traditional pipe replacement of this size. Best of all, the environment was spared from tons of waste caused by disposing of the damaged pipe, not to mention the exhaust pollution from diesel excavators and trucks over weeks of works.

A few weeks after completion of the job, Ben was called by the farm owner. He explained that they had received substantial rain and it was enough to fill both dams. The good news was that since the Sumoline was installed, there was no loss of water and the dam was operating at full capacity.

If you’re looking for agricultural plumbing repairs that don’t cause damage to your property, talk to your local Nuflow pipe relining experts. We’ll get the problem sorted faster and with less disruption.