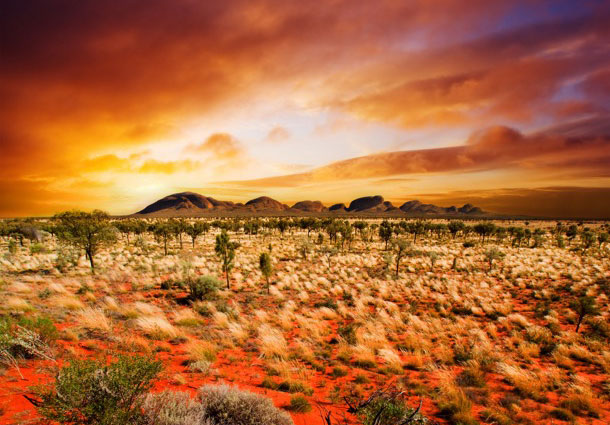 Cracks in newly-installed 225mm reinforced concrete stormwater pipes.New paving and landscaping had been completed above and excavation was not a viable option.

With the help of an air-conditioned van and plenty of ice, Nuflow’s Blueline relining system was installed over three cracked lengths of pipe:

TIME TAKEN TO RELINE THE PIPES

WAS PIPE RELINING CHEAPER THAN DIGGING?

Australia’s Northern Territory in the wet season is no place for amateurs when it comes to relining underground pipes.

With searing temperatures, extreme winds, high humidity, and the constant threat of a downpour, it takes meticulous planning, the very best materials available and a good deal of experience to make sure things go right.

So when a well-known, national building contractor asked Nuflow Darwin’s Mick Hodgetts to look at cracked pipes in a newly-laid, underground stormwater network at a sensitive government facility, he jumped at the chance to show them what Nuflow could do.

WHY PIPE RELINING WAS THE BEST OPTION

Hodgetts learned that the cracks and misaligned joints had been discovered in the 225mm reinforced concrete pipes during a final survey of a major development project recently completed at the site.”We got a phone call to say they wanted a price on repairing the pipes with a reline,” he said.”The project was pretty much all done, with paving, roadways and landscaping above the pipes finished off.”But with these cracks in the pipes the tier one contractor wouldn’t be able to get sign-off or be paid.Hodgetts said digging everything up would have been very costly and somewhat awkward.

“Given the infrastructure above that would have had to be destroyed, it would have been too expensive to dig it all up,” he said.

“Apart from that, it’s not really a good look for a builder to start digging up something that’s just been completed because people start asking questions about why things had gone wrong or what else might not be up to standard.”

In all, there were three sections of pipe that needed to be relined, the lengths being:

As with most government work, more than one business was invited to provide quotes, and despite having to compete with the company that had carried out the original survey, Nuflow Darwin got the nod.

“We were pretty happy when we found out we’d been competitive enough to beat the other company for the work,” Hodgetts said, “particularly considering they’d had the inside running having surveyed the pipes for them.”

Hodgetts said Nuflow’s cure in place piping (CIPP) methods, where liners are custom designed to suit the specifications of each job, and pulled into place before curing, were perfectly suited to this type of job.

“Some of our competitors use an inversion method, where one long liner goes in,” he said.

“That might work for jobs with straight, continuous runs but it’s not so cost-effective when there’s multiple areas of damage or cracking, or where there are different pipe widths or tricky junctions and joins like on this job.

“With our system we can stop and start where the actual damage is, which makes us more competitive on price.”

With the approvals and early planning all done, Hodgetts set about the task of organising the reline, but as the scheduled start date approached, the territory’s wet season extremes had hit hard.

Unexpected wild winds made it impossible to keep shade tents and equipment secured, putting things on hold for a few days, and over those days the temperature rose.

By the time the winds died down enough for them to get going, the heat and oppressive humidity had set in.

“Temperatures of 35-40 degrees aren’t unusual up here in Darwin, and the humidity at this time of year is really high, so working conditions can be pretty difficult,” he said.

“But you’ve just got to get on with it.

“The biggest problem for us, however, was that it caused the resins in the liners to cure more quickly so the time you have between getting the liner unpacked and wet-out, and getting it into place before it cures, is reduced.” 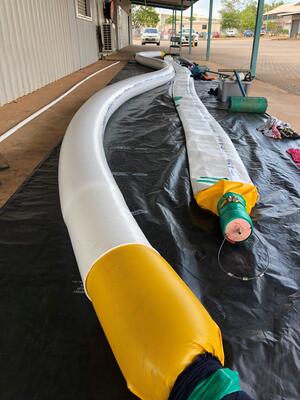 To stretch what little time they had, Hodgetts and his team worked in an air-conditioned coaster bus out on site and kept the liners and resin on ice until the very last minute.

“The air-con and ice cooled them down as much as possible but there was nothing we could do after that,” he said.

“Eventually we just had to go outside and work against the clock as fast as we could.

“The liners started getting hot as soon as we started putting them in, so it ended up we only had about a four to six-hour window to get things done.

“It certainly wasn’t easy, but thanks to the bus and the ice and some good hard work we managed to make it work.”

But Hodgetts’ weather woes didn’t stop there. Heavy rain was forecast for the coming days, so holding off for cooler weather wasn’t an option.

“There’s always the risk of rain coming along in the middle of the wet season, so when you’re relining stormwater pipes that could be a major issue,” he said.

“If it hits, you just have to let it overflow or put pumps into the pits and pump it all out as it comes in, but that wouldn’t be ideal for a reline job.”

While the weather was challenging enough, it wasn’t the only complication Hodgetts and his team had to deal with.

The access point to the drain was only 600mm in diameter, which made it even more difficult to get the liner in and cured within the limited time available. 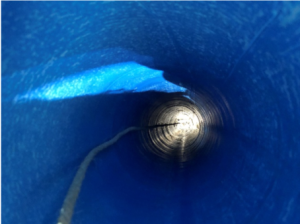 Also, given the sensitivity of the facility, there were restrictions around when and how they were able to access the site. The escorts assigned to see them on and off the premises were often ‘missing in action’ themselves, and with tier one and two contractors involved there were a number of challenges negotiating the execution of the whole process.

“Needing escorts on and off the site meant you had to have everything planned and with you every time you turned up, and often when we were finished there was no-one around to escort us back out,” he said.

“Also, with two tiers of contractors to deal with we had to be patient waiting for answers and approvals at times.

“We just tried to keep plugging away, asking the questions we needed answered and keeping the communication going and it all worked out in the end.”

It’s estimated that relining often works out about 70 per cent cheaper than traditional methods of digging up pipes and replacing them, particularly on jobs like this one where infrastructure or landscaping above the pipes would otherwise be ruined and need replacing.

Hodgetts said that all things considered, relining with Nuflow’s Blueline system was quite simply the quickest, cleanest, easiest and cheapest way to fix their problem.

“It certainly wasn’t the easiest of jobs for us, but I’m really proud of what we did,” he said.

“We learned a lot from looking back on the job and evaluating it afterwards and we plan to do more of that retrospective evaluation from now on.

“The authorising company also gave us some good feedback because they knew the difficulties, we worked through to get things done and I’m fairly confident there will be similar work in the future.” 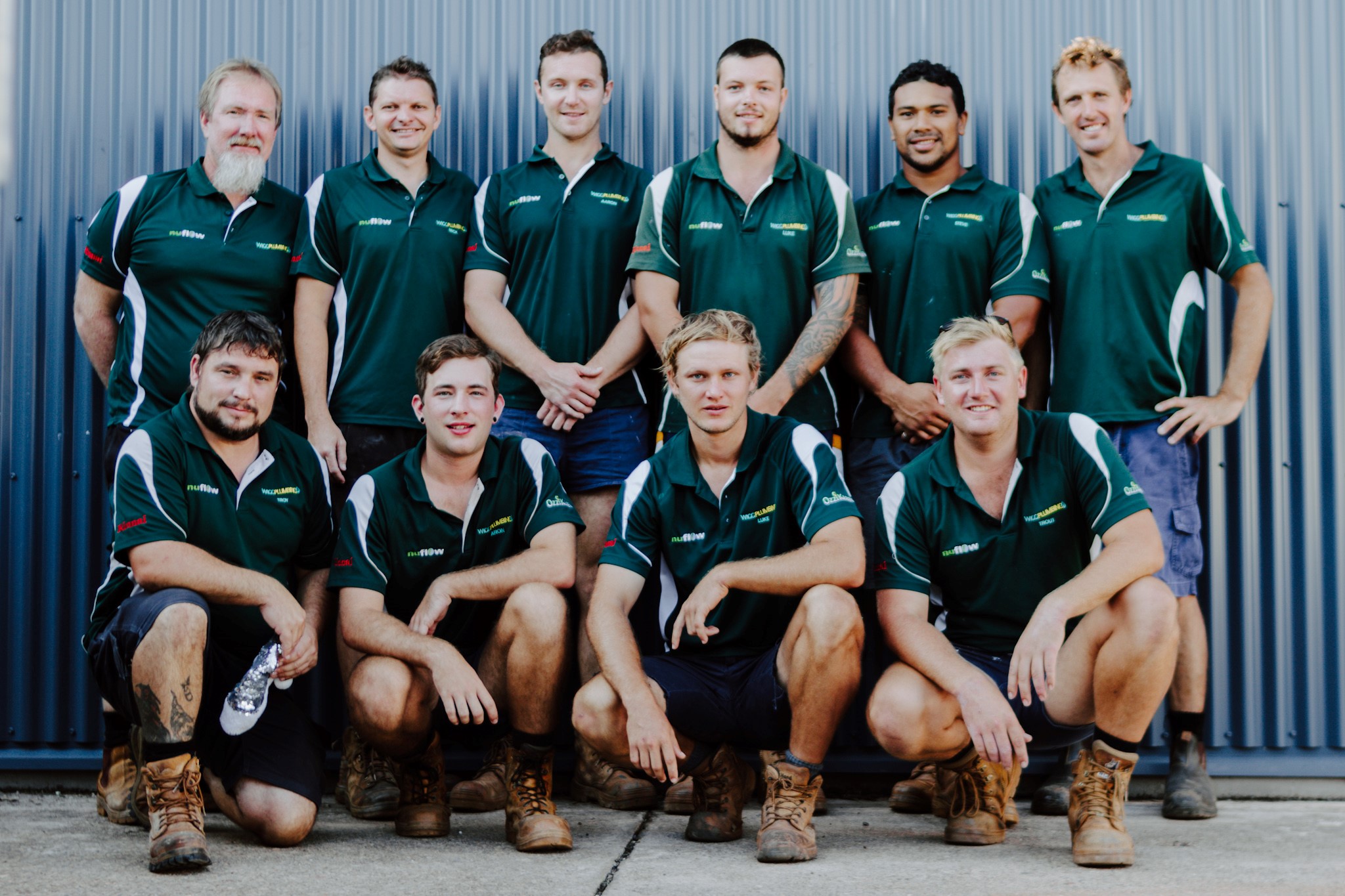