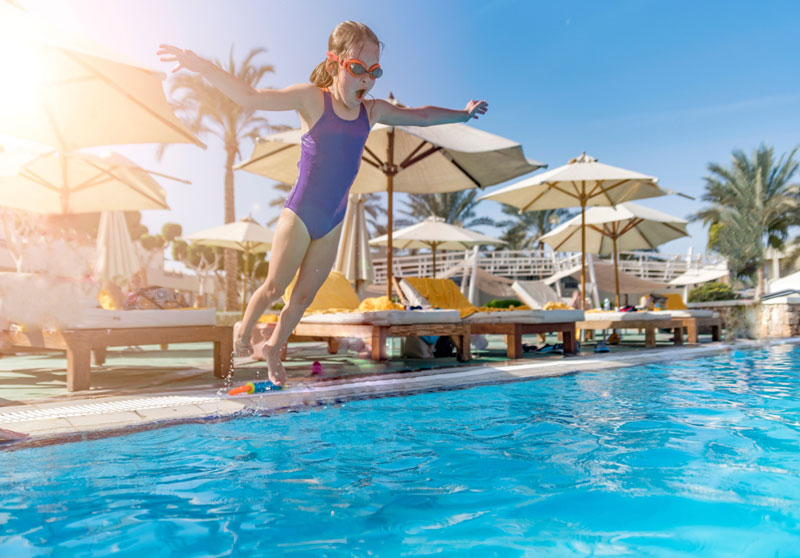 There were ongoing blockages in sewage pipes servicing the amenities block at the resort pool.

The repair had to be carried out without any disruption to guests or to the recent poolside renovations. Investigations revealed:

Removal of tree roots and relining of broken areas of pipe, accommodating the dropped sections of pipe and repairing the cracked junction using our Blueline product.

Disruption to guests or operations: Nil

OTHER BENEFITS OF PIPE RELINING

The million-dollar outdoor renovation’s all done, gardens are mulched, and 1000 guests are about to arrive for some fun in the sun, when the pipe system around the pool’s amenities block backs up.

With a 27-hole golf course that hosts the Australian PGA Championship, eight bars, dozens of tennis courts and a purpose-built conference centre awarded ‘Queensland’s Best’, maintaining high standards at the RACV Royal Pines is quite literally, par for the course.

So when the resort’s maintenance team start having ongoing leakage and breakdowns in the pipes servicing the amenities block around their newly-refurbished pool, restaurant and bar, they knew they needed to act fast.

WHY PIPE RELINING WAS THE BEST OPTION

Engineering and Operations Property Manager, Adam Lane, said pipe relining was put forward by his team as the preferred option because it meant remaining operational.

“Having blocked pipes or closing down amenities obviously affects guests, so of course we needed things fixed quickly, but we also needed to make sure the solution didn’t create any negative impacts for our guests,” he said.

“Sure, we could have cut the concrete, and dug the broken pipes up, but that would have been invasive and quite difficult, and we would have had to shut down the whole area, which would definitely have disappointed guests.

“I didn’t actually do the math on whether it was cheaper to reline the pipes or dig and replace them because there were more important issues to factor into the decision, but it would have been pretty expensive to re-lay new concrete.”

Income would most likely also have fallen if the poolside catering facilities been forced to close during excavation.

If the damage had been in a less sensitive area, traditional dig and replace methods might have been an option, but Lane said even then, relining would most likely have been the preferred strategy.

“Even out in the open you would have had the impact of machines and digging in the vicinity of guests, and for us, guest safety and satisfaction is the number one priority.

Lane and his team decided to give Nuflow a call.

“We had a contact at Nuflow because they’d done some smaller jobs with us, so we thought we’d ring and see what they could offer.”

Stuart said despite the challenges of the job, he knew he could get it done with Nuflow’s Blueline relining system.

“With Blueline’s flexibility we could have done the whole job in a day,” he said, “but because they wanted to keep everything running without any disruption to guests or to their new renovations, we broke it into a couple of sections.

“That way we could work on one area of broken pipe while the others remained functional.”

“We design the sleeve specifically to suit the configurations of each job,” Stuart said.

“With this one we had breaks in two lengths of 100mm pipe and a 45-degree junction, so we designed the liner to cover those areas of damage.

“We used a ‘pull-in-place’ method of installation, where we wet-out the liner, packed it up with resin, and then pulled it into place so that it sat right where all the breaks were.

“Once it cured, the repaired areas were structurally stronger than ever before, because we basically created a new, rock-hard section of pipe inside the old one.

He also said that because of the thin profile and smooth lines of the relined interior of the pipe, there was usually reduced drag and therefore improved flow capacity.

“All without having to dig a thing.”

Stuart said Nuflow wins out in the complex jobs because of the system’s flexibility and their in-house research, development and manufacturing capabilities.

“These products can be used on pressurised (up to 1800KPA) and non-pressurised pipes and they easily cope with bends, elbows, branches and transitions in diameter (40mm up to 1500mm and even more for specialist jobs).

He believes Nuflow’s ability to develop and manufacture their own products means they’re better-equipped to adapt, and to give customers the before and after-sales service they need, including pre-purchase advice and a 50-year product warranty.

“Everything’s manufactured in-house which means they can change things to suit each job,” he said.

“Most of the other pipe relining companies use off-the-shelf materials brought in from overseas, which have one standard set of instructions for use.

“That means less flexibility around things like modification of materials or cure times to suit the conditions of a particular job.

And what’s the verdict back at the Royal Pines?

Well, six months on it’s still all smiles around the pool.

Whilst quietly confident, Lane initially reserved his judgment on the success of the repair, saying he would wait until it had stood the test of time.

But after a very busy summer season without issues, he was satisfied.

“The reline job has proved itself over our peak period,” he said, “so we’re happy.”

Stuart says the system they used would have been significantly cheaper in the long run than digging.

”To dig would have probably cost anything from $10,000 to $40,000, especially with all the other services under there that needed to be protected,” he said.

“Who knows what the end cost might have been because once you start excavating around pools engineers have to get involved and it can really cause dramas cutting into concrete.”

But importantly, it was the ability to keep operating that brought smiles to the faces of Royal Pines Resort management.

“They just wanted to hear that the job was done on time with no disruption to service, and that was what we gave them,” he said.

“There were no complaints at all, and they still seem happy with the way the pipes are flowing – so when it comes to our line of work, we take that as a win.”

There are thousands of maintenance holes (manholes) in suburbs and towns, they are often overlooked. When you do notice a...
Read more
A storm water stack hidden behind a brick wall at a Queensland beachside resort was causing havoc until the Nuflow...
Read more
Licence Number: QBCC 15198038
Visit nuflow.net
2023 © Nuflow Gold Coast