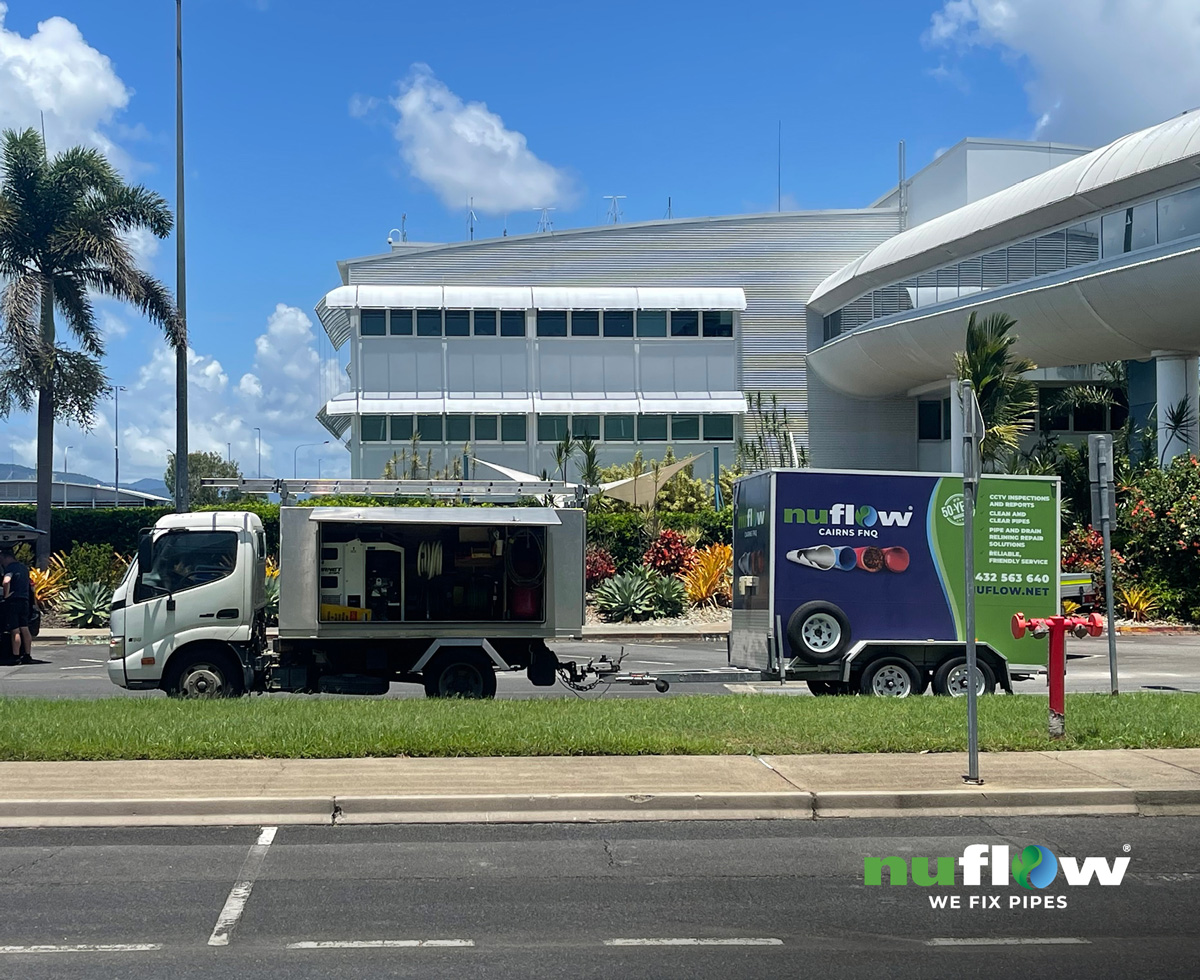 When a commercial site is facing pipe problems, it’s ideal that the resolution is as non-invasive as possible. That way, significant damage to business assets and impacts to operations can be avoided.

This was especially important for Cairns International Airport when they needed to update the ground floor sewer lines of their administration building. Major interruptions would have massively inconvenienced commercial tenants, especially over an extended period of time, not to mention the potential costs this would involve. Luckily, Nuflow Cairns had the tools to get things sorted quickly and efficiently.

The sewer line of the administration building’s entire ground floor bathrooms, both male and female, were starting to age. The team in charge of maintenance knew this was something they needed to sort out immediately, otherwise they could potentially risk major damages down the line. So, seeking preventative repairs, they called their regular plumbing contractor who then referred them to Nuflow Cairns.

When the Nuflow Cairns technicians got on site, they followed standard procedure and began with a camera inspection. This meant they were able to get a comprehensive view of the 100mm fibre reinforced concrete (FRC) pipes. They could see that the sewer line was nearing the end of its life. 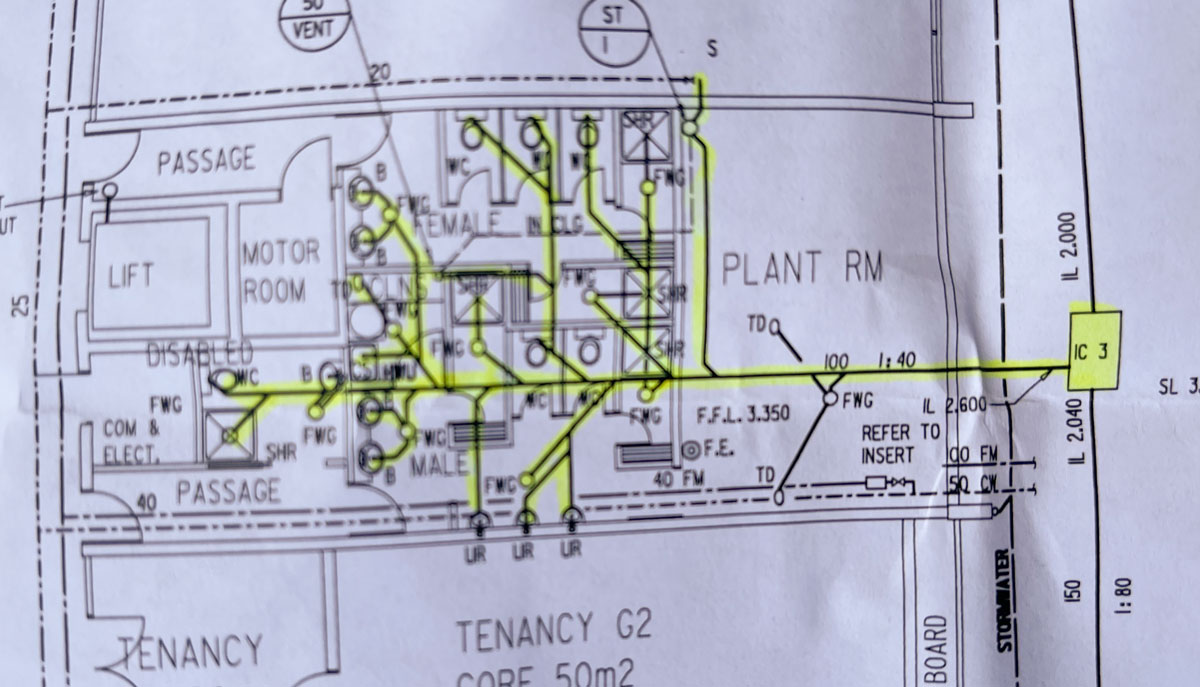 The cost to completely replace the sewer line replacement cost would have been significant, and not to mention time-consuming, especially for two bathrooms. It’s impossible to replace a sewer line without digging, so this course of action would have involved removing all fixtures, wall and floor tiles, as well as cutting up concrete slabs just to excavate and remove the existing pipe work. Then, after the pipes were replaced, it would all have to be recemented, retiled, rebuilt and refurbished back to its former glory. Plus, the upstairs bathrooms also deposited into this sewer line, meaning they would be out of commission as well.

With pipe relining, all of this could be avoided, repairing the FRC pipes in less than half the time with very little intrusion.

Blueline gets the job done

The technicians decided on Nuflow’s blueline, which was perfectly suited to the needs of this pipe repair. As one of the most versatile liners in the world, its adaptability for any pipe configuration meant it could easily account for the 20 plumbing junctions within the admin building’s sewer line.

Because of the size of the pipe network, this was a big job for the Nuflow Cairns team. Including the initial camera inspection, it took the team 2 days to prepare the site and clean out the pipes so they were ready for relining. The whole pipe relining process took 11 days to complete with no destruction. They were also able to by-pass the upstairs bathrooms so they could stay in operation the whole time. The below video shows the full scope of what the team was able to achieve.

At the end of the job, the team ran the CCTV camera back through the pipes, and found everything to be in perfect working order. They completed a full sewer pipe repair without digging, leaving the pipes better than new. 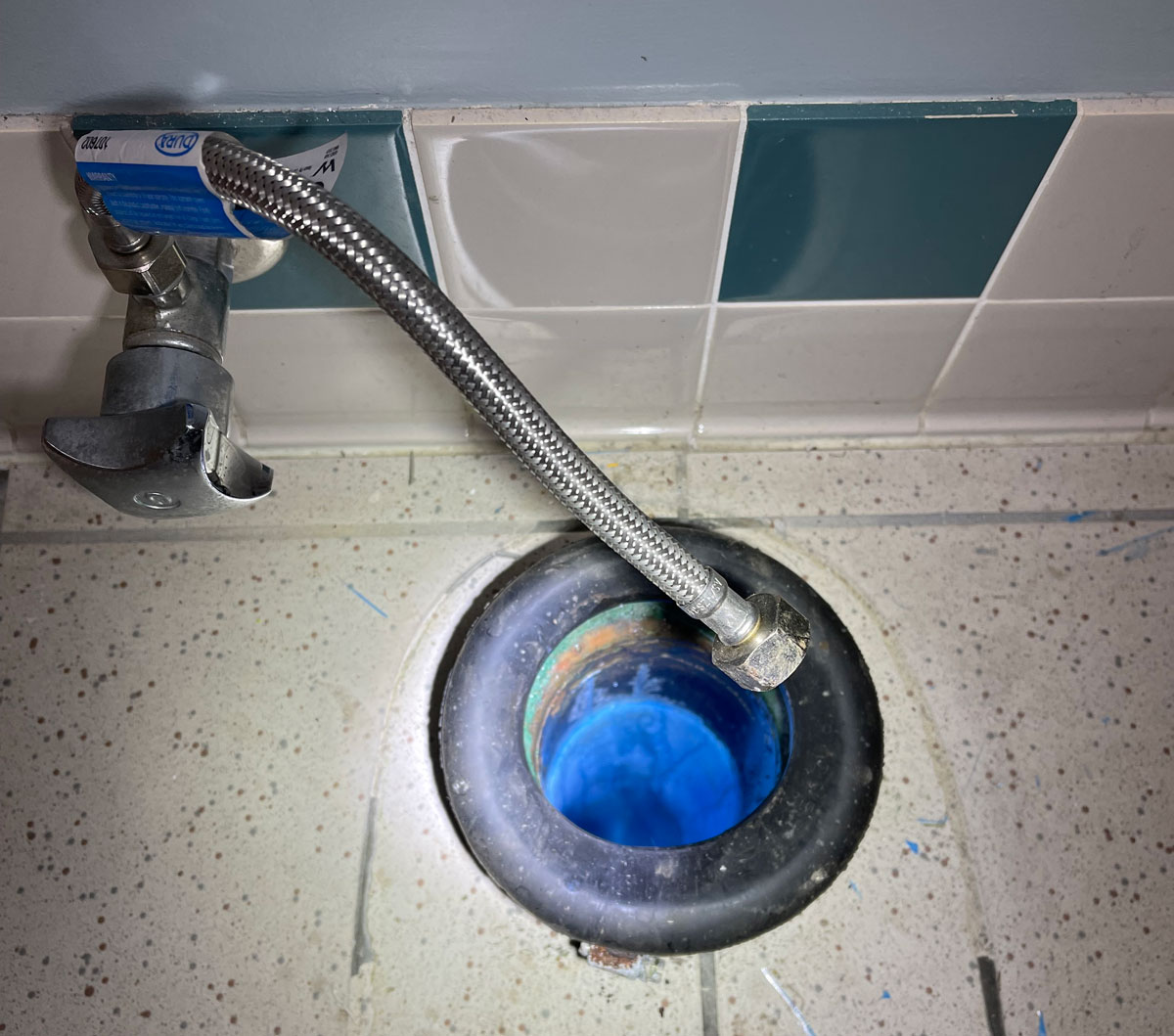 Another Nuflow client thrilled with the result

Cairns International Airport was very happy with the results, and that they were able to avoid costly excavations.

“The company provided a professional and well-organised service,” says the maintenance manager. “Giles is very knowledgeable, and provides excellent advice with a comprehensive explanation of ‘what’ and ‘how’ for the works he performed. He came in on budget and his time estimate was spot on. If asked to recommend him and Nuflow, I would not hesitate to put his name forward.”

Get in touch with Nuflow Cairns

If you’re ever in need of commercial sewer line repairs, you know who to call. Nuflow Cairns will find the best possible solution for your pipe problems, and save you tonnes of time and money thanks to our relining technology. Get in touch with the team today.

When you’re working at the office and trying to concentrate, the last thing you need is noisy construction or repair...
Read more
Licence Number: Plumbing and Draining Licence No17633, QBCC Licence No62497
Visit nuflow.net
2022 © Nuflow Cairns