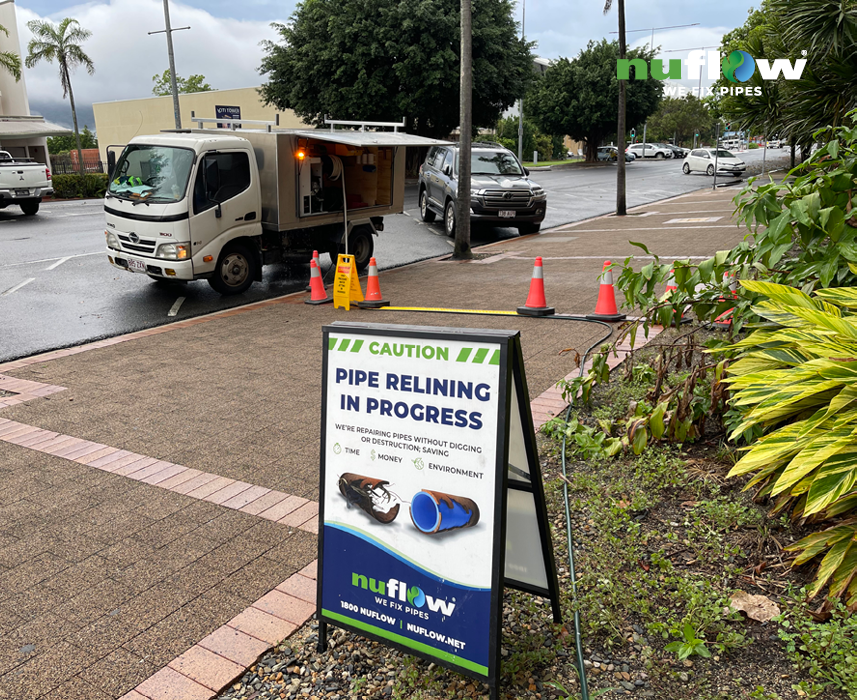 When you’re working at the office and trying to concentrate, the last thing you need is noisy construction or repair work disrupting you. So when repairs were needed at a major government building in Cairns, the building managers were looking for a solution to avoid noise and other disruptions that interrupt workday life.

The building itself has stormwater pipes which run down from the roof, through the concrete walls and along the ceiling cavities. Over the years, due to a mix of ageing pipes, deterioration and movement in the building, the stormwater pipes had started to leak. If this leaking persisted, it would not only cause flooding in the building, but also mould and potential health risks for occupants.

The managers needed a solution to fix the leaks, so the building’s plumbing hydraulic engineer investigated their options and provided recommendations for the repairs.

One option for repairs was to replace the broken stormwater pipes altogether. This would have required costly repairs to reinstate the ceilings and walls to their existing state. The building’s walls are made of solid tilt slab wall-panelling with difficult-to-get to-ceiling and concealed wall cavities, so any works done to access the stormwater pipes would have required major excavation and costly repairs.

This kind of project would have taken up to five months to complete, potentially longer, and would most likely have required the building’s workers to relocate during repairs.

Another option was pipe relining. This innovative plumbing solution delivered by our team at Nuflow Cairns involved creating a new pipe within the existing pipes, without the need to cut into walls or remove the ceiling. This solution is also perfect for non-destructive pipe repairs in those hard-to-access locations.

Keen to avoid any downtime, the building management team chose to go ahead with Nuflow Cairns and the pipe relining.

Our expert team used a hardy, specialist material to reline the affected pipes, sealing off any cracks and fixing the problem faster and with far less interruption than replacing the stormwater pipes altogether. We are able to fix the leaks without any destruction. 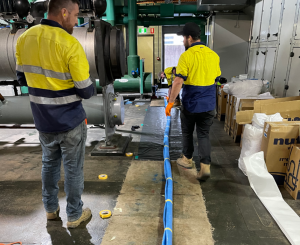 To carry out the project, our team first attended the building to inspect the problem and get a thorough understanding of the pipe network. While we were provided with the building’s plans, we double checked the stormwater pipes by doing a drain inspection using our CCTV drain camera. Through this footage we were able to determine where the issues were in the stormwater pipes, and could then put a strategy into place to avoid any disruption to our clients.

We then prepared the stormwater pipes using our high-pressure water jet blaster. Then using our specialty equipment, we relined the pipes using a hardy resin, to create a pipe that’s often even stronger than the original. Our team sectioned off areas of the stormwater pipe network as they went, repairing the relevant section before reattaching it to the network and moving onto the next area. This meant we were able to complete the repairs while the building’s stormwater drainage system was still active.

The Nuflow Cairns team initially estimated that the repair work would take 4.5 weeks to complete, and we started the project in mid-April 2021.

Cairns was then hit by torrential rain, with 800mm falling over 10 days. This was problematic because to carry out the pipe relining, we needed to block off sections of the stormwater pipes. But to ensure no flooding in the building, we also needed to ensure there was adequate drainage still available through the stormwater pipe system.

Through careful planning and carrying out the repairs strategically, we were able to avoid any flooding, and still manage to complete the job in the planned time frame. 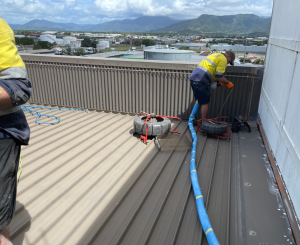 Relining after the heavy rainfall

Throughout the entire project, the building maintained 100% occupancy of workers, and they were all able to carry on their jobs as usual with no disruption.

Particularly given the heavy rainfall and the risk of delay, the client was incredibly happy to have the repairs completed with minimal fuss and delivered on time.

After we completed the works, we again did a drain inspection using our CCTV drain camera to assess the full network of stormwater pipes and ensure the leaks were solved. We also provided this footage to both the building’s plumbing hydraulic engineer and the client, to give them added peace of mind. The result was a very satisfied client, with the work being described as a ‘high standard’. 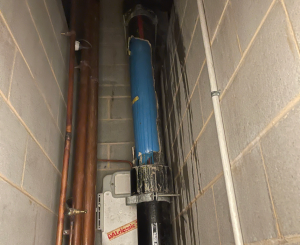 Need a commercial plumbing solution for a blocked drain, broken pipe or sewer pipe, or a stormwater drain issue in Cairns?

Nuflow Cairns can help. Contact us today to find out about how our friendly team can fix your issue with minimal downtime or disruption.

When a commercial site is facing pipe problems, it’s ideal that the resolution is as non-invasive as possible. That way,...
Read more
Licence Number: Plumbing and Draining Licence No17633, QBCC Licence No62497
Visit nuflow.net
2023 © Nuflow Cairns